While no one could have predicted that the Climate Change hysteria would have as its most effective spokesperson a 16-year-old Swedish girl who sailed across the Atlantic to New York City in a sailboat, the radical wing of the globalist network of organizations that are forever intertwined in a web of talking points, spin, computer models, polls, consensus science and predictions of doom and gloom were sure that this small child would be absolutely perfect to shame many clear-thinking adults into perhaps altering their opinions on Global Warming and its man-made impact on the world.

Before we go about trashing a little girl for her absolutely genuinely-held beliefs, however, let’s take a moment to remember that behind this movement are the very same elements pushing parents the world over to accept the words of toddlers when they claim to be the opposite sex and must be placed immediately on puberty blockers to forego the child actually changing his/her mind.  This is child abuse, pure and simple, and Greta’s parents are the culprits at the foundation of this horrid treatment of their autistic daughter. 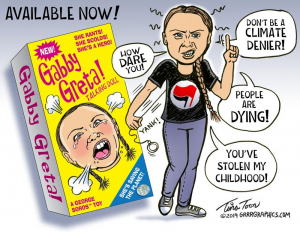 In any other world, Greta would be an exceptional young lady with a bright future and a tremendous potential as a shaper of other children’s endeavors.  She would be an inspiration to all those around her and eventually, one day, might be mother to another child or children of exceptional potential.  Instead, her life from the moment of birth, was put on a different path, one that both her mother and father had predetermined would be destined for victimhood, scrutiny, embarrassment and fear.  In their zeal for their Progressive beliefs, they served up their only daughter as a sacrifice to the gods of fame, greed and mutual admiration.

You see, the parents of Greta Thunberg are Antifa supporters bent on the destruction of Free Speech, free thought and free expression.  Their daughter, who never had the opportunity to decide for herself what was right and what was lunacy, was completely drowned in the religion of Climate Change from before she could speak and now has a 100% disconnect from reality or common sense.  Greta is a product, a fabrication, of her very own parents.  They, themselves, are products…fabrications…of the Climate Change behemoth that lurks behind every emotional story regarding the environment and how Capitalism has been there every step of the way to rape and pillage it.

16-year-old climate change activist Greta Thunberg has quickly risen to become one of the world’s most prominent political leaders, inspiring a mass movement of millions seemingly out of thin air to combat the problem of global warming.

However, the young girl’s sudden ascent to prominence is not happening by chance. She has deep connections to the globalist elite and activist parents who are supporters of the far-left domestic terrorist group ANTIFA.

Thunberg was forced to apologize this summer for wearing an ANTIFA t-shirt by mistake. She claimed on her Twitter account that she did not realize that the t-shirt was advertising a violent extremist organization.

Yesterday I posted a photo wearing a borrowed T-shirt that says I’m against fascism. That T-shirt can apparently to some be linked to a violent movement. I don’t support any form of violence and to avoid misunderstandings I’ve deleted the post. And of course I am against fascism.

However, her parents – Svante Thunberg and Malena Ernman – have been photographed wearing the exact same t-shirt, casting serious doubt on her explanation. 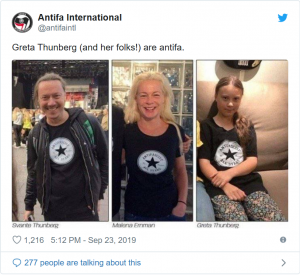 The unbelievable dogma of the coming apocalypse has been so ingrained in Greta’s head that she even claims to see carbon dioxide particles floating in the air!  Thunberg’s mother, Malena Ernman, is a popular Swedish opera singer, and a long-time far left activist.

Thunberg’s initial school strike coincided with the publication of her mother’s memoir, “Scenes from the Heart.” Her first protest was initially made public on the social media account of Ingmar Rentzhog, the book’s public relations man.

They have also turned Thunberg into a money-making machine, using the child to fleece environmentalists out of large donations. Rentzhog founded a climate-focused PR firm ‘We Don’t Have Time,’ and put Thunberg on the Youth Advisory Board. The organization has raised nearly a million pounds before Thunberg was even thrust into the spotlight as a worldwide icon.

The most compelling part of Greta’s story, however, revolves around her family’s associations with a group known as One Movement Initiative.  Ostensibly, this group is an “academy” of longboarders (another name for skateboarders) who assure the world that if we only work together, globally, will we solve Climate Change.  This group, along with other societies of the far-Left, appear to be entangled with the globalist secret societies that permeate Europe and the US and have even become inexorably tied to Satanic symbolism and the mysterious Bilderbergs.  Turn to the following page for more on these dark connections!