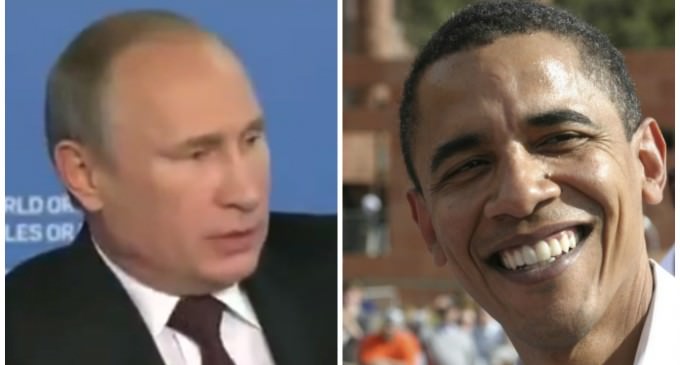 When Barack Obama told Russia's Vladimir Putin that he would have “more flexibility” to negotiate with Russia after he was re-elected, many took that as a sign that Obama was willing to concede even more military strength to Russia's president. Putin must have agreed, and now he's testing Obama's weakness.

In what is arguably an act of aggression on the part of Russia, the U.S. Navy was forced to launch fighter jets in response to two Russian planes flying within a mile of the USS Ronald Reagan.

While the Navy says that such acts are “not unprecedented,” one must ask if these acts are a direct response to Obama's weak foreign policy that has stripped the United States of its negotiating power on the world stage.

As the President Barack Obama continues to concede power on the world stage, Russia is taking notice, and is shaming the U.S. in the process.

A U.S. aircraft carrier is the superior display of our strength and power projection. It is a floating example of American sovereignty, and represents the finest and greatest traditions of the U.S. Navy. Having one’s name affixed to a Navy aircraft carrier is undoubtedly the highest honor. And so it is with the venerable USS Ronald Reagan, named after the man who stood at the Brandenburg Gates and forcefully demanded of Soviet Union leader Mikhail Gorbachev, “Mr. Gorbachev, tear down this wall.” His words rallied generations who until then never had the freedom and liberty to stand up, and the wall came down. How terribly sad to report the abject disrespect just given to his memory.

The USS Reagan was sailing in international waters east of the Korean peninsula, Stars and Stripes reports. It adds that the U.S. is currently engaged in joint military exercises with South Korea.

The Russian “Bear Bombers” approached the aircraft carrier at an elevation of 500 feet Tuesday morning, according to Navy spokesman Commander William Marks. He said U.S. F/A-18 Super Hornets escorted the Russian planes as they transited out of the area. “We would characterize this as still at a safe distance. This kind of interaction is not unprecedented,” Cmdr. Marks told Fox News.”

As Putin continues to rear his head, and thumb his nose at the American military, we may either concede to our weakened global position, or react and reassert ourselves as a nation of strength. Unfortunately, Obama seems to have determined which path he intends to take.

I want y’all to contrast the interaction between Reagan and Gorbachev and that between Obama and Putin. Now of course the liberal progressive sweethearts who just LOVE to hang out at this site will revert to BDS — no not the liberal Boycott, Divestment, and Sanction policy towards Israel, nah, I am talking about Bush Derangement Syndrome. You see, what Putin is doing today is Bush’s fault, — you know, just like ISIS was created by George W. Bush. So, the incessant aggression of one Vladimir Putin has nothing to do with the weakness exhibited by one Barack Obama. Oops, I recall Obama’s words, Putin is acting out of weakness. Yes, Putin deployed combat troops and aircraft into Syria out of a position of weakness — which I suppose is why Russian bombers flew at 500 ft just one mile away from our aircraft carrier in international waters off the coast of South Korea.

Wait a doggone minute! We’re conducting joint military exercises with South Korea, and Russian bombers buzzed our carrier? This is supposed to be the Russia whose economy is decimated. So Russia can buzz our carrier off the coast of South Korea. They’re deploying and establishing military bases in the Arctic. Their paramilitary forces have overrun the Crimea and taken over good portions of eastern Ukraine. Russia can deploy ships that transit along the U.S .coast heading towards Cuba and its submarines are patrolling near communications cables in the Atlantic. And don’t forget, Russia is deploying forces into Syria.

And what is happening in the United States? President Obama vetoed the National Defense Authorization Act because he wanted more domestic spending. The Obama administration has announced another 40,000 personnel cuts to the active duty U.S. Army — but they do have three female Ranger School graduates.

The commander-in-chief has decimated our naval strength to the point that for the first time since 2007, America had no carrier battle group (CVBG) coverage in the Persian Gulf. It was “gapped” — we shared that with you here.