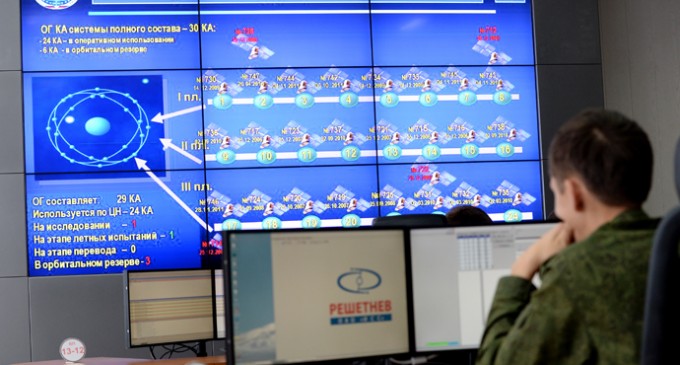 As incredible as it seems, the Obama Administration doesn’t see it as a threat to allow the Russians build a satellite system, similar to GPS, on American soil that can be used to spy on us!

The system is called GLONASS, and the CIA and Pentagon is building opposition to the State Department’s support of Russia to build a half-dozen of these ‘monitoring stations’ around the US.

These stations would not only allow Russia to spy on us, but it would improve the accuracy of their weaponry and help build a direct rival to our GPS.

US intelligence and military are pressing the State Department not to license construction of monitor stations for Russia’s GLONASS navigation system on US territory, media reveals. The stations reportedly spark fears of spying opportunities.

Moscow sent a request to build monitor stations for GLONASS, a Russian satellite system similar to GPS, on US territory in May 2012.

The White House has been pondering over the proposal ever since. A number of meetings between Russian and American authorities on the GLONASS monitor stations in the US have taken place, but so far US security and military agencies have not agreed about how to react to Moscow’s request.

The CIA and Pentagon suspect that such stations could be used for collecting intelligence data and other military purposes, like collecting exact coordinates of covert facilities in the US for precision missile guidance, a weekend report in The New York Times revealed.

“In recent months, the Central Intelligence Agency and the Pentagon have been quietly waging a campaign to stop the State Department from allowing Roscosmos… to build about half a dozen of these structures, known as monitor stations, on United States soil,” the report alleges, quoting anonymous US officials.

The concerns are that the stations might help Moscow spy on the US as well as improve the precision of Russian weaponry.

Also, American lawmakers don’t like the idea of cooperating with the direct rival of the US national Global Positioning System.

Apart from the US and Russia, China and the EU are also developing satnav systems of their own, Baidu and Galileo respectively.

“They don’t want to be reliant on the American system and believe that their systems, like GPS, will spawn other industries and applications,” a former senior official in the State Department’s Office of Space and Advanced Technology told the newspaper. “They feel as though they are losing a technological edge to us in an important market. Look at everything GPS has done on things like your phone and the movement of planes and ships.”

Still, the White House so far has been opposing accusations of the US intelligence community against Russia as “It doesn’t see them as a threat,” an unidentified administration official said.

The Obama administration is currently trying to mend Russian-American relations, damaged over Syria and asylum to former National Security Agency contractor Edward Snowden, who revealed document-supported evidence of the US spying on unprecedented levels over global networks, including after their closest allies.

In October 2012 Vitaly Davydov, the former deputy of Russia’s Roskosmos space agency, revealed that Moscow needs to deploy eight monitor stations in the US for correct operation of the system in North America. He also disclosed that 19 monitor stations of American GPS positioning system were operable in Russia as of 2012.

On the contrary, in the latest report on the GLONASS in the US, the NYT claims that there are no GPS monitor stations in Russia whatsoever.