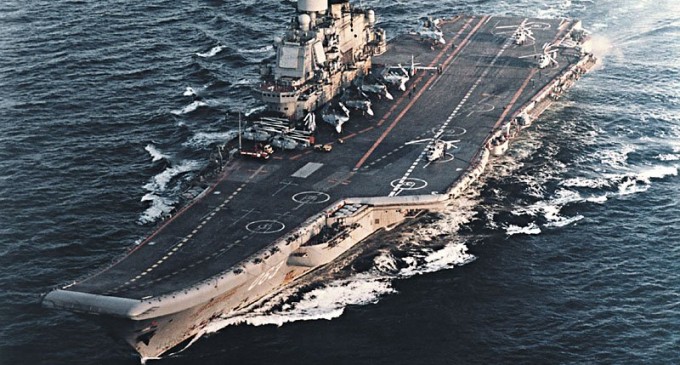 It looks like somebody is finally taking the threat of ISIS seriously, but sadly it's not the Obama administration.

No, this unexpectedly responsible actor is none other than Russia, which has taken the fight to ISIS in the most clear way possible. Under the direction of President Vladimir Putin, the Russian Navy has deployed a massive warship to the waters off the coast of Syria.

Coming in at 305 meters, the Admiral Kuzetnov comes armed with jet fighters and helicopters that will launch attacks on Islamic State forces in the Middle Eastern country. In total, the number of aircraft the vessel is estimated to be able to carry is 41 planes and 18 helicopters, meaning the already-formidable Russian presence in Syria will be provided with even more firepower than it already has.

While President Obama will likely dismiss Russia's deployment of the Admiral Kuzetnov as the sort of muscular posturing that he seems to be so averse to, the truth is the president could stand to learn a lot from the way the Russians are handling ISIS.

Learn more about the Admiral Kuzetnov on the next page: