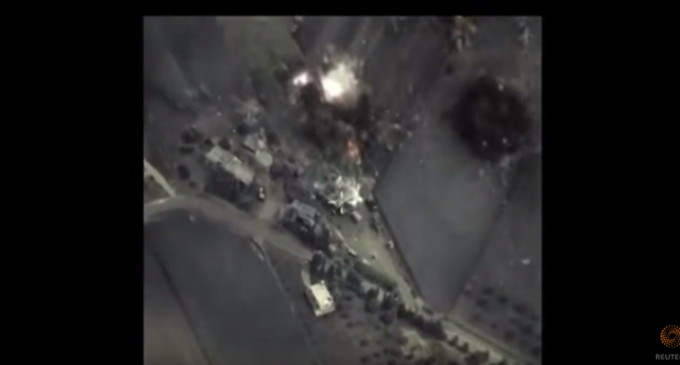 Yes, this is Obama “Leading” from Behind…way behind. Russia takes the lead.

Wednesday, Russia launched its first air strike in Syria and has told the United States to get out of its way, according to a U.S. official.

Russian bombers attacked targets in Homs. It was unclear which of the rebel groups fighting Syria’s government was the target. Rumors are that the targets were American backed rebels fighting al-Assad. The Russians did not strike at ISIS.

As the strikes were taking place, Russia’s government formally approved a request from President Vladimir Putin to authorize the use of Russian troops in Syria. They do not waste time, do they?

“Russia will factually be the only country to carry out this operation on the legitimate basis of the request of the legitimate government of Syria,” said Dmitri S. Peskov, Putin’s spokesman.

Russia also wanted the U.S. to stand down in northern Syria so that Russia can attack additional rebel targets (likely pro-democracy groups like FSS and Jabhat al Nusra and some other Islamist groups). “If you have forces in the area we request they leave,” a Russian general told his American.

U.S. forces did not honor the request. A U.S. led coalition has launched thousands of airstrikes in Syria in the past year, and the United States has armed and trained some of the anti-Assad rebels.

But, don’t worry, Obama and Kerry will kowtow and retreat, being subservient to the Russians.

“We still conducted our normal strike operations in Syria today,” a senior Pentagon official told Fox News. “We did not and have not changed our operations.”

However, on Tuesday, Defense Department spokesman Peter Cook said that U.S. Defense Secretary Ash Carter has directed that the U.S. air effort not conflict with the Russian military.

Russia recently established a base of operations in Syria in an effort to prop up the government of Dictator Bashar al Assad.

“The Russians are no longer advising, but co-leading the war in Syria,” one intelligence official told Fox News. And they have an active base in Baghdad in Iraq.