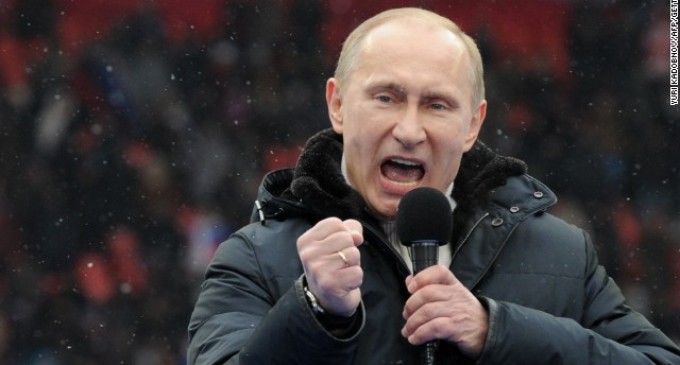 This past Monday Russian President Vladimir Putin signed off on a new law that bans profanity in any art form, cultural or entertainment event in the country.

USSR 2.0 is at hand. I guess he saw all the communist actions Obama was enjoying and got a little jealous.

(CNN) — Thinking about making a film? Better leave out the foul language if you want it to be seen in Russia. The same goes for plays. Even rock stars will need to leave their potty mouths at home.

Russian President Vladimir Putin signed off on a new law Monday that bans swearing at arts, cultural and entertainment events in the country.

Any new film containing obscene language won't be granted a distribution certificate, so there's no chance of seeing it at the movie theater.

And copies of books, CDs or films containing swearing can only be distributed in a sealed package labeled “Contains obscene language,” a Kremlin statement said.

According to state news agency ITAR-Tass, individuals caught using foul language face a fine of up to $70, while officials can be fined up to $40 and businesses nearly $1,400. They face a higher fine and a three-month suspension of business for repeated offenses.

Determination of what counts as profane language will be done through “an independent examination,” the news agency said.

According to the Kremlin, the legislation “bans the use of obscene language when ensuring the rights of Russian citizens to the use of the state language, and protecting and developing language culture.”

The law could come into effect as soon as July 1, ITAR-Tass said, but it doesn't apply to cultural and artistic works that have already been issued.

While some may hail attempts to clean up the nation's language, it will likely be seen by critics as the latest step under Putin's leadership to limit freedom of expression and promote a conservative, nationalist viewpoint.

A report by rights group Amnesty International in January highlighted a denial of “basic freedoms” in Russia, which last year introduced a law barring anyone from talking positively about homosexuality in earshot of minors.