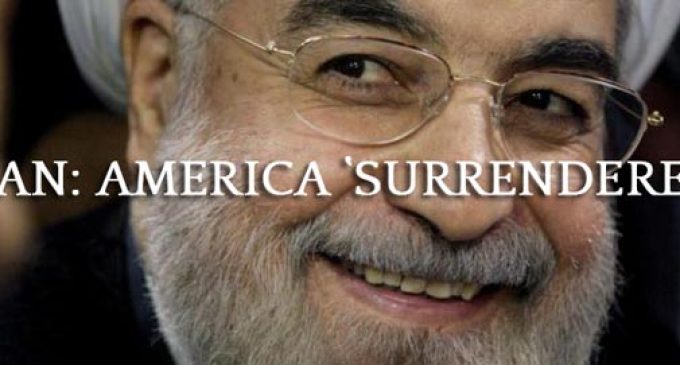 Iran’s President gloated on Twitter that the U.S. and world powers had ‘surrendered’ to Iran. Meanwhile, the United States has relaxed sanctions in return for a deal intended to restrict Iran’s nuclear program.

‘We Will in No Way, Never, Dismantle’ Nuclear Infrastructure.

Do you think The U.S. has ‘surrendered’ to Tehran?

Or are the plans of President Obama and his Secretary of State, John Kerry, just too subtle to perceive?

Iran vowed to maintain its nuclear infrastructure and threatened to boost its uranium enrichment capabilities just hours after announcing that it had agreed to a deal to halt some aspects of its contested nuclear program.

Iran and Western nations announced on Sunday that they had agreed to an interim deal to halt portions of Iran’s nuclear program in exchange for some $7 billion in sanctions relief.

Secretary of State John Kerry celebrated the interim agreement, which will officially begin on Jan. 20.

However, Iranian officials threatened to ramp up nuclear activities should they feel the West is violating the accord.

“Iranians endured sanctions for 10 years, resisted, so the world would respect our right to enrichment, this is now the case,” Araqchi was quoted as saying. “This game is played in our court. We cannot lose and return to enrichment as we wish.”

Araqchi reiterated that Iran has a right to enrich uranium, one of the key sticking points in the deal, and predicted that the deal has less than a 50 percent chance of success.

“We don’t need enrichment right from the Americans, who are they to give that right?” Araqchi said. President Barack Obama “said the upcoming talks have a 50-50 percent chance of success, I say its even less.”

Iran will continue to enrich uranium, the key component in a nuclear bomb, up to 20 percent levels until right before the deal takes effect, according to Araqchi.

“Iran will continue with 20 percent uranium enrichment by the end of the day on Jan. 19 and will suspend 20 percent enrichment on Jan. 20,” the Islamic Republic News Agency (IRNA) quoted him as saying.

Iran will immediately begin to see “targeted relief” from the economic sanctions as soon as the deal begins, according to Kerry.

“The $4.2 billion in restricted Iranian assets that Iran will gain access to as part of the agreement will be released in regular installments throughout the six months,” Kerrysaid in a statement. “The final installment will not be available to Iran until the very last day.”

The White House is refusing to release the official text of the nuclear deal, despite requests from reporters and members of Congress.