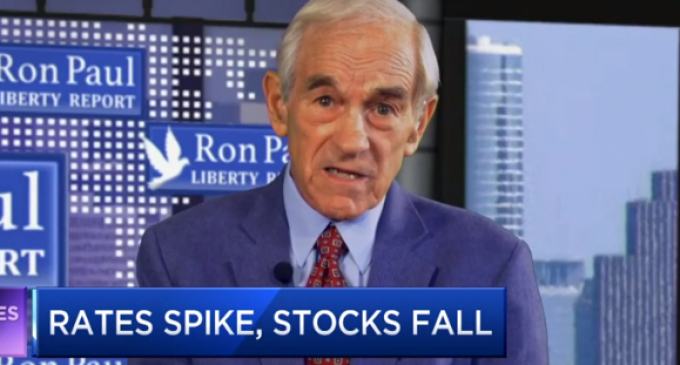 Ron Paul recently said on CNBC's “Futures Now” that the United States is headed towards a market meltdown and major recession. The former Republican congressman from Texas claims that there is no way to prevent this economic crash that is barreling towards us at a faster and faster pace.

If you only take the stock market into account you would think that Wall Street is in good shape. The S&P 500, Dow Nasdaq all look great as well.

However, it’s all built upon “biggest bubble in the history of mankind,” according to Paul, who says that when it bursts, it could cut the stock market in half.

“I see trouble ahead, and it originates with too much debt, too much spending,” Paul said.

“The Congress spending and the Federal Reserve manipulation of monetary policy and interest rates — debt is too big, the current account is in bad shape, foreign debt is bad and it’s not going to change,” he said. “The Fed will keep inflating, and that distorts things,” Paul continued. “Now they’re trying to unwind their balance sheet. I don’t think they’re going to get real far on that.”

Move to the next page for details + video: