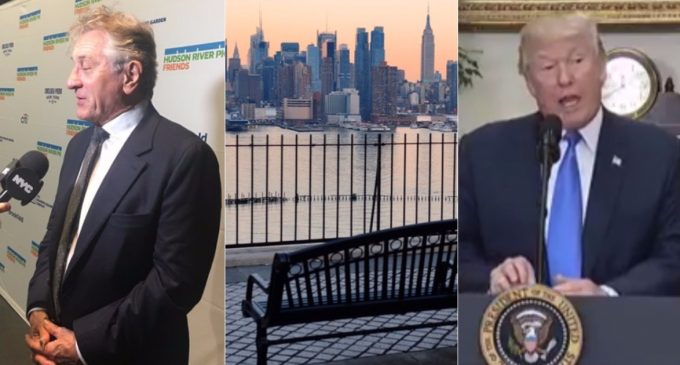 Robert De Niro’s time is up. He needs to go find a nursing home with Nancy Pelosi where they can discuss how the Constitution doesn't give people the right to yell wolf in a crowded theater while sitting on a bench.

De Niro was honored with at the Annual Hudson River Park Gala Thursday night with a park bench dedicated to him. Of course, the only way to thank a crowd of imbecile liberals is to attack the 99% and the President.

He starts off his acceptance speech by using crass unsavory language to describe his President.

“F–k you, Donald Trump. It’s a horror with this motherf—er.” The “Good Fellas” actor also described the President as a low life.

But, that is just the tip of the iceberg. This sad hate-filled crusty old man wants to personally bully all Trump supporters. De Niro states that is one of the only things that can bring him pleasure anymore. Continue to the next page to hear what actor Robert De Niro wants to do to Trump supporters.