These insect drones will be equiped with a camera and microphone. Will they be able to collect blood (DNA) or implant toxins or mechanical devices as well? 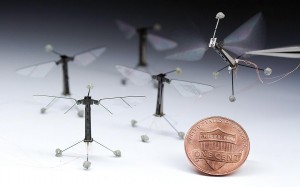 On a freezing day in 2006, Wood arrived at his Oxford Street laboratory at Harvard. On the workbench sat a 60-milligram robot with a three-centimeter wingspan and a thorax roughly the size of a housefly. It was tethered to a six-foot-tall computer rack crammed full of high-voltage amplifiers and data-acquisition equipment. Wood carefully checked the connections and signals.

Then he flipped on the power and watched as the wings of his tiny creation began to vibrate, lifting the robot into the air for several seconds. Wood jumped in jubilation. It had taken him seven years to get to this point, and it would take another five to reach his next breakthrough: sustained flight along a preprogrammed path. An e-mail with proof of that milestone arrived in his inbox at 3 a.m. in the summer of 2012. An ecstatic graduate student had sent a video update on the lab’s latest prototype, now named RoboBee. It showed the delicate machine rising into the air and demonstrating, for the first time, stable hovering and controlled flight maneuvers in an insect-scale vehicle.

“I didn’t end up sleeping the rest of that night,” Wood says. “The next morning, we had champagne and all that, but it was more of a relief. If we couldn’t do this, we would have realized we were doing something wrong the whole time.”

Wood has pioneered microscale robotic flight; other researchers have used flapping-wing dynamics to reduce the size of aerial vehicles capable of carrying payloads. In 2011, California-based AeroVironment demoed its Nano Hummingbird. The aircraft has a 16.5-centimeter wingspan; it can fly vertically and horizontally and hover in place against gusting wind. It weighs 19 grams—lighter than some AA batteries—but it carries a camera, communications systems, and an energy source.

Insect Aerodynamics
1. As a wing flaps, a tornado-like spiral of air forms along its leading edge. This vortex causes air pressure to drop briefly above the wing; higher pressure pushes the wing from below. 2. The wing rotates in preparation to flap in the opposite direction. This rotation creates forces similar to backspin on a tennis ball, pulling a faster stream of air over the top surface. 3. As the wing moves in the opposite direction, it collides with the swirling vortex of air created by the previous stroke, a principle called wake capture. Depending on the angle of the wing as it hits the wake, it can generate additional upward or downward force.
Trevor Johnston

TechJect, a company that spun off from work done at the Georgia Institute of Technology, recently unveiled a robotic dragonfly with a six-inch wingspan. It weighs in at 5.5 grams (lighter than a quarter) and can be outfitted with modular electronics packages enabling high-definition video and wireless communication. The TechJect Dragonfly takes advantage of an aerodynamics principle called resonance. When wings flap at their most efficient frequency—which happens when air density, wing speed, and an organism’s weight are perfectly balanced-—they create waves of vortices that merge and build. The audible result is the hum of a hummingbird or buzz of a bee, says Jayant Ratti, TechJect’s president. A flapping-wing drone utilizing resonance generates significant improvements in energy efficiency, creating optimal lift with minimal effort.

Ratti and his team made the product commercially available to hobbyists and early adopters last year, and they plan to release another version by the end of 2014 for other markets. “The acceptance has been phenomenal,” Ratti says. “It is not yet a mature technology, but it’s getting there. We are still getting feedback and making improvements.”

Small, fragile drones don’t solve the problem of damage caused by unexpected impacts, and so Guiler and Vaneck have focused on durability. After observing the fly at the bar, the two engineers searched for someone with experience replicating insect flight. They teamed up with Wood, whose lab had since joined Harvard’s Wyss Institute for Biologically Inspired Engineering, and together they applied for an Air Force grant. Wood’s group then used an image-capture system to record and analyze fly behavior before, during, and after collisions with glass. By closely observing the positions of the flies’ body parts, they could measure the exact flip and twist of wings and legs.

When Guiler and Vaneck slowed down the film, they were amazed at what they saw. “I thought the fly would tumble a bit and lose a lot of altitude,” Vaneck says. “But the fly recovery was elegant. It happened so rapidly; it was breathtaking.”

Guiler and Vaneck homed in on the idiosyncratic geometry of the fly’s body. Its exoskeleton had accordion-like parts that acted as shock absorbers. It also seemed to sense impending collisions. Just before the moment of impact, the fly flew at an angle that ensured its legs touched the glass first. At that instant, the wings froze. Every time the fly slammed into the window, it reflexively surrendered to the crash momentum and fell. But within milliseconds, the fly’s center of gravity appeared to pull the fly back into a stable position. Then its wings flapped again, propelling the insect into a controlled hover. “It can hit and recover in two or three wing beats, which is phenomenal,” Vaneck says. “There is no manmade system that can do that.”

The Coming Swarm
Single bio-inspired drones are useful, but dozens can work together to accomplish a complex task. Vijay Kumar, an engineer at the University of Pennsylvania, teamed up with Arizona State University biologist Stephen Pratt to apply three lessons learned from ant swarms to fleets of quadrotors. 1) In nature, ants act autonomously. Engineers traditionally use a centralized system to choreograph movement in swarms, Kumar says. As a swarm grows larger, the control algorithms become increasingly complex. Instead, Kumar tries to program his aerial vehicles with a common set of instructions; the quadrotors divide up tasks and assume complementary roles. 2) Individual ants are interchangeable. “If I want to scale up my swarm, maintain the predictability of its behavior, and make it robust, the gang has to be able to perform the task if an individual is knocked out,” Kumar says. So he makes his aerial vehicles identical to one another. 3) Ants sense their neighbors and act on local information. Kumar outfitted his vehicles with motion-capture systems, cameras, and lasers that enable them to avoid obstacles and maintain a set distance from each other. As a result, they can fly in tight formations, work together to pick up heavy objects, and collaboratively create a map of their environment.
Courtesy KMEL Robotics/YouTube

The two engineers used those insights to guide the development of a resilient flying machine. The body needed to be shockproof, and the wings needed to be controlled independently. So they designed a shell for a quadrotor that incorporated shock absorbers—rubber dampers in between sections made from carbon fiber and plastic. They gave each of the four rotors its own motor in order to mimic the alternating wing speed that provides four-winged insects with exceptional control. When the vehicle is blown out of position or clips an obstacle, its computer detects the discrepancy between its current position and its programmed flight path, and an autopilot reflexively kicks in to recover stability.

Last February, the engineers sent their drone, called the InstantEye, to Fort Benning near Columbus, Georgia, for its annual Army Expeditionary Warrior experiments, where an infantry platoon used it to help complete a set of assigned missions. The soldiers gave it a “green” rating, one of the highest available.

As the first generation of microdrones reaches the market, significant engineering challenges still remain. For Wood, the big hurdle is power. Unlike the much larger InstantEye, Nano Hummingbird, and Dragonfly drones, RoboBees must be connected to an external power source. Wood is using microfabrication to try to shrink onboard batteries, and he’s collaborating with researchers at Harvard, the University of Washington, and the Massachusetts Institute of Technology to pursue novel batteries, micro fuel cells, and wireless power transfer. He estimates he is only one or two years away from his first autonomous-power demonstration.

Guiler and Vaneck aim to replace the propellers on their quadrotor with flapping wings. The InstantEye is far better at recovering from wind gusts and minor collisions than other drones are, but its propellers can still get tangled in branches or power lines. “We wanted to bring something to the field fast,” Guiler says. “But what we discovered was flapping-wing birds and insects are perfectly suited for environments where you have dynamic obstructions—the trees are moving, the branches are moving. If they do get stuck, by their very motion they get unstuck. They kind of beat their way through. We realized a flapping wing was the only thing that would work.”

And then there’s Dickinson, who initiated the project to build the robotic fly. Today he runs a lab at the University of Washington and works with advanced imaging systems to study insect flight. Early high-speed cameras captured about 3,000 frames per second. “Fifteen years ago, the flies looked like little fuzzy UFOs,” he says. Now the biologists use cameras that can run at 7,500 frames per second, significantly higher than what was once available to researchers, and that work in infrared light. (Update: This sentence has been rewritten for clarification. Other cameras can reach much higher fps.) Dickinson has also gone beyond analyzing flight; he’s using electrodes to record the activity of neurons in insects’ brains. He links them to a flight-simulation system and presents them with visual stimuli—a picture of a predator, for instance—that cause them to react. “We can begin to learn how neurons in the brain are processing information in flight and how sensory information is transformed into action,” Dickinson says. “The stuff that made Rob [Wood]’s work possible was just the basic mechanisms by which animals keep themselves in the air. Now we are going beyond that to understand how flies steer and maneuver.”

Learning how nature creates superior sensors could lead to lighter, smarter drones. And as that happens, their range of applications will grow. Guiler and Vaneck plan to sell the InstantEye to the military and law enforcement. The British Forces have recently begun using a microdrone, a hand-launched helicopter called the Black Hornet, to scout for insurgents in Afghanistan. Microdrones may also have uses closer to home. They could allow police and SWAT teams to gather footage inside office buildings or banks and between skyscrapers, where winds typically gust.

Wood visualizes an even more diverse array of uses for RoboBees. A box of about 1,000, he notes, would weigh one pound. They could easily be shipped to a disaster site and deployed to search for survivors. They could also monitor traffic or the environment and help pollinate crops. Research scientists could use them to gather data in the field.

Whatever their application, microdrones are no longer a da Vinci–like dream of engineers. They’re taking off—agile, resilient, and under their own power.