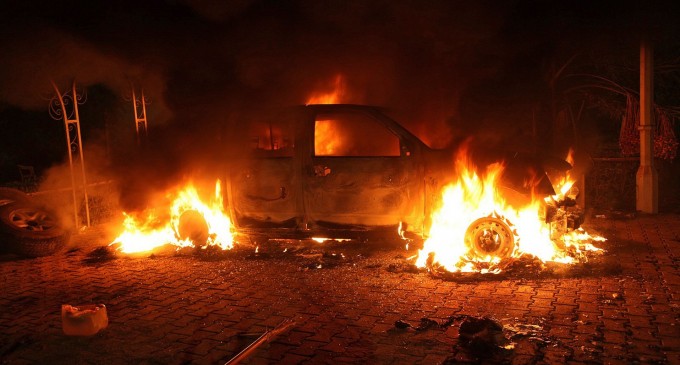 U.S. Special Operations forces captured one of the suspected leaders of the Benghazi terrorist attacks, Ahmed Abu Khattala, in a secret raid in Libya last Sunday after months of planning with the FBI.

Unfortunately, Special Operations forces have yet to pick up Obama and Hillary.

The officials said Ahmed Abu Khattala was captured Sunday near Benghazi by American troops, working alongside the FBI, following months of planning, and was now in U.S. custody “in a secure location outside Libya.” The officials said there were no casualties in the operation and that all U.S. personnel involved have safely left Libya.

Abu Khattala’s apprehension is a major victory for the Obama administration, which has been criticized for having failed so far to bring those responsible for the Benghazi attacks to justice.

Speaking at TechShop in Pittsburgh, Pa., President Obama praised U.S. Special Operations forces for “showing incredible courage and precision” in capturing Abu Khattala, who Obama said “is alleged to have been one of the masterminds” of the Benghazi attacks.

“He is now being transported back to the United States,” Obama said.

“We continue to think about and pray for the families of those who were killed during that terrible attack,” the president added. “But more importantly, it’s important for us to send a message to the world that when Americans are attacked, no matter how long it takes, we will find those responsible, and we will bring them to justice. And that’s a message I sent the day after it happened, and regardless of how long it takes, we will find you.”

A three-count criminal complaint filed by the FBI last July and unsealed in federal court in the District charges Abu Khattala with “killing a person in the course of an attack on a federal facility involving use of a firearm” on Sept. 11-12, 2012, providing and conspiring to “provide material support to terrorists resulting in a death” and possessing and using a firearm during a crime of violence.

The Washington Post learned about the capture Monday but agreed to a request from the White House to delay publication of a story because of security concerns.

Last year, the U.S. attorney in the District filed charges against Abu Khattala and at least a dozen others in connection with the Benghazi attacks. None besides Abu Khattala — who is expected to be arraigned in Washington — has been apprehended.

Officials, speaking on condition of anonymity about the still-secret operation, would not say where Abu Khattala was being held. They said he was “en route” to the United States but would not say when he was expected to arrive. Several terrorist suspects abducted overseas have been held aboard U.S. naval ships at sea while being interrogated, after which they were turned over to FBI “clean teams” to question them for trial without endangering the admissibility of evidence.

The State Department designated Abu Khattala a terrorist in January, calling him a “senior leader” of the Benghazi branch of the militant organization Ansar al-Sharia, a group that arose after the 2011 fall of the Libyan regime of Moammar Gaddafi.

Two CIA contractors, Tyrone S. Woods and Glen Doherty, were killed early the next day in a mortar attack at a nearby CIA annex where the attackers moved after overrunning the diplomatic compound.

Sen. Saxby Chambliss (R-Ga.), the ranking Republican on the Senate Intelligence Committee, told reporters after news of the capture broke that the administration had “been in touch with us for the last several days on this.”