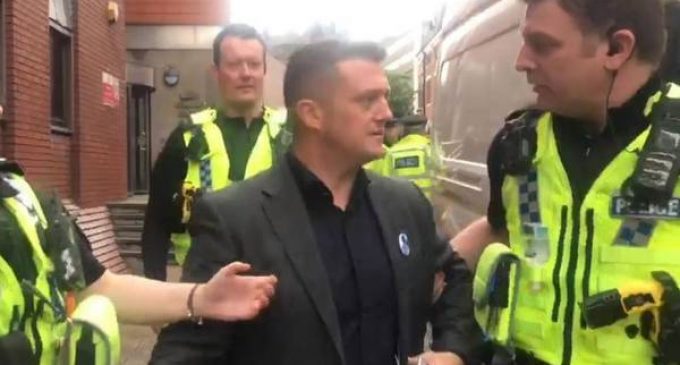 Tommy Robinson, a famous political activist and one of the founders of the English Defense League, which opposes mass Islamic immigration, was arrested on Friday after filming outside a courthouse where several Muslims were on trial for sex-related crimes. The judge tried, convicted, and sentenced him to 13 months in jail, also issued a gag order on the press, demanding a total news blackout on the case.

With that blackout. the land that bequeathed the world moved beyond Orwell totalitarianism, importing a policy from Czech writer, Franz Kafka. The defendant in his book The Trial, the defendant is not allowed to know the charges levied against him. Most media was remarkedly compliant with the judge's order.

Carl Benjamin, who produces video commentary under the name “Sargon of Akkad,” is a popular British YouTuber who has somewhere around a million subscribers, and who routinely criticizes Islam, identity politics, and political correctness with wit and panache. He is generally a lively, free-wheeling, sardonic fellow, but in the two-hour-plus video he posted on Saturday about the Robinson case, he was uncharacteristically sober, exceedingly cautious, and at times even sounded mournful.

“I did tell you that Britain isn't a free country, didn't I?” he said a minute or so into his video. “I've been saying it for ages… and nobody listens.” He made it clear he was not about to violate the gag order — not, as he put it, about to “blunder into the jaws of the beast, in much the same way as I guess Tommy has,” and thus “deliberately put myself in the line of fire with the UK government, giving them just cause to arrest me.”

Move to the next page for the remainder of the story plus videos: