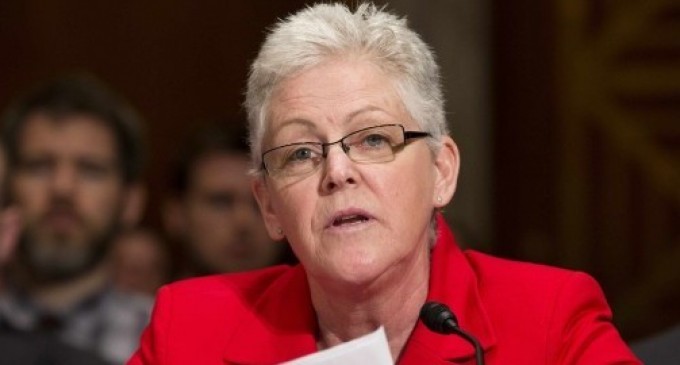 This is outright suppression of the media.

We know that the media is tightly controlled in a communist state, and this lady has just been made an example of.

A reporter has been detained by Capitol Hill police for trying to ask a question of Environmental Protection Agency administrator Gina McCarthy.

Natter was detained while covering the American Council On Renewable Energy conference, where McCarthy spoke. Also speaking at the conference was Rhode Island Democratic Sen. Sheldon Whitehouse, a staunch supporter of green energy who regularly takes the Senate floor to sound the alarm on global warming.

McCarthy spoke about renewable energy issues, including the EPA’s proposal to cut back the amount of ethanol refiners are required to blend into gasoline annually to avoid economic calamity. She also talked about the Obama administration’s view that energy and environmental policy go hand in hand.

“The energy issues and the environmental issues we are facing today are really two sides of the same coin,” she said.

Natter was eventually let go after police checked with their superiors and ran a background check on the reporter, determining he had the proper press credentials.

After consulting with his superiors and running a background check the police have let me go.

.@alexcguillen: Not the first time I have been threatened with arrest for doing my job as a reporter. Probably not the last either.

He also noted that McCarthy did not answer the question he braved Capitol Hill police to ask her.