If this report is accurate it wouldn’t be the first time UN trucks have been spotted on our soil. Last year, armored UN trucks were spotted and videotaped traveling through Georgia last year.

Have you seen United Nation’s medical or armored trucks traveling through the U.S.? If so, please send your account with photo or video proof if possible through our Facebook page.

For the past week, people have been reporting seeing United Nations medical vehicles traveling throughout the Southern U.S. Finally, one curious and concerned citizen was able to get an actual picture of one.

This picture was taken in Mississippi. The photographer stated that the vehicle was heading West on Interstate 10. In case you are not familiar with the route, it basically connects the entire portion of the Southern U.S. Hence, this vehicle is on due course with Texas, where most Jade Helm activity is believed to take place during the upcoming ‘drill,’ and a state that’s been identified as ‘hostile’ according to Government documents. 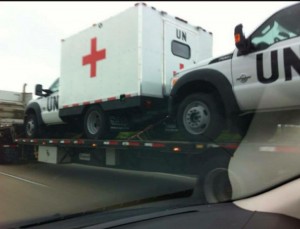