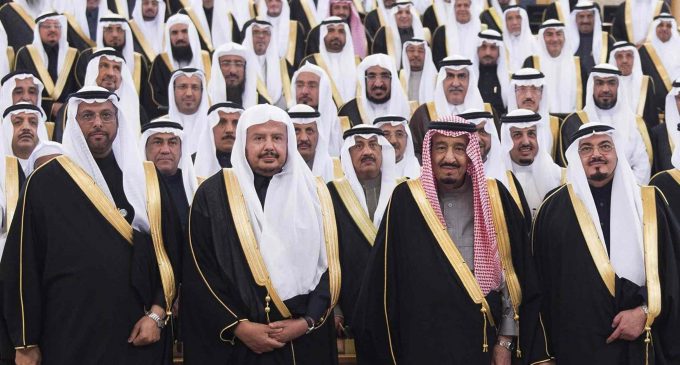 What do you think those words mean? I will tell you. It's a blunt message to the people about to learn a shocking new historical narrative. They involve the infamous House of Saud, the ruling family dynasty in Saudi Arabia. The common political narrative shared about the relationship between Israel and the Arab World is overly simplified, according to a new report.

Who do Arab Jews worship? الله

The ‘Prophet' Muhammad didn’t actually make up a new religion. He wasn’t that clever. He was an uneducated merchant who frequently collaborated with Jewish merchants. He admired the unity of the Jewish faith yet knew Arabs would never accept a religion that required them to abandon their primitive barbaric ways. Before Islam, Arabs worshiped many many gods, including the Abrahamic God. Unified faith allows for a unified people behind a political agenda in the hands of evil rulers. Think the modern day Catholic Church led by His Evilness, Pope Francis.

But, it wasn’t just The Prophet Muhammad who viewed religion as a tool for evil. There were other Jews in Mecca who also looked on with favor at the evil practices a part of Arab Culture at that point in history.

What erupted was a war of corruption, not a war of faiths. The Qur’an was to Islam what Mien Kauf was to Nazism and The Communist Manifesto to Socialism. The Qur’an was written over a period of 23 years. At first, The Prophet Muhammad and the Meccan Jews were in cohorts. Passages instructing Muslims to “kill the infidels” and the notorious “verse of the sword” were only added after these two groups of conniving savages had a very bitter falling out.

This is a case of a deal gone bad that continues to haunt the Middle East to this days. What follows is a tale of revenge that leads straight to the infiltration of the present day House of Saud by the warring Jewish merchants.

In modern day Arab World, what would be the worst thing an Arab ruler could discover? That the royal ancestral line was tainted with Jewish blood and that the most powerful Arab country dominating the Middle Eastern World was part Jewish domination.

The Arabic translation, how Saudi Arabia might have Jewish connections and what this means for Middle East relations on the next page