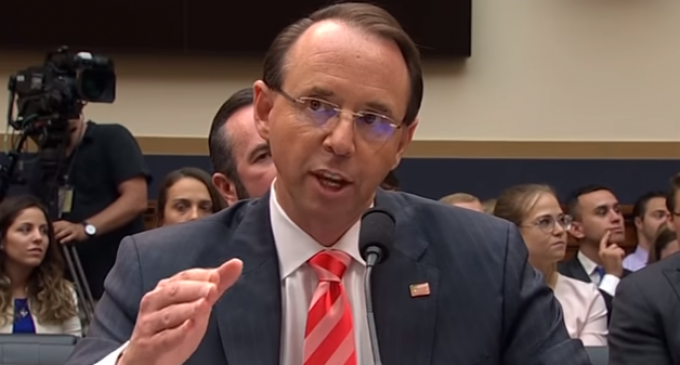 The deputy attorney general Rod J. Rosenstein offered to secretly record President Trump inside the Oval Office in order to obtain material to whip up support among Cabinet members to impeach the president with the 25th amendment.

The US Constitution's 25th amendment provides a means to remove a president should they become incapable of performing their duties. George W Bush and Both Ronald Reagan and used it temporarily before they were put under medical anaesthesia.

Anti-Trumpers have often floated it as a strategy to remove President Trump, claiming his isn't mentally fit for the job. A number of variables would have to fall into place for this to occur. First, Vice President Mike Pence and eight of the 15 members of the cabinet would have to decide to move forward on the issue. Then they would have to prove their case before securing a two-thirds majority vote in Congress if President Trump were to challenge them.

Memos have surfaced that reveal Rosenstein spoke to colleagues about making secret tapes of the president as part of an attempt to remove President Trump with the 25th amendment.

See full details, including Rosenstein's reaction to the report, on page 2: