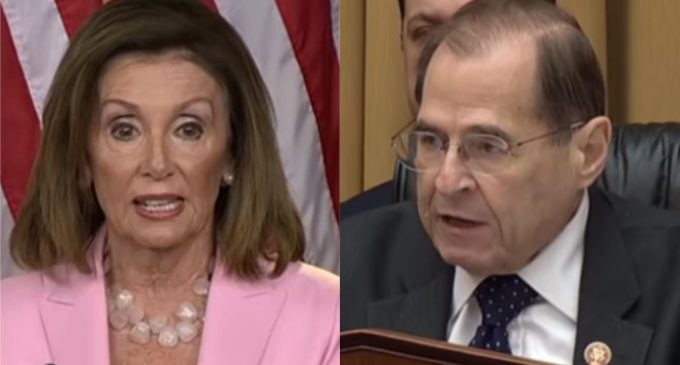 A report from Politico reveals that the Democrats fall 43 votes short of what they would need to impeach President Donald Trump. According to a Wednesday report citing Capitol Hill insiders, House Democrats remain deeply divided, with only 175 out of the party’s 235 U.S. Representatives ready to vote to impeach.

They present this figure while discussing fallout over the combative Tuesday hearing with Corey Lewandowski, billed as a fact-finding session on “presidential obstruction of justice and abuse of power.” The former Trump campaign manager declined to answer questions citing executive privilege, “filibustered,” and mocked Democrats on the House Judiciary Committee, chaired by Rep. Jerry Nadler (D-NY) — the figurehead of far-left impeachment efforts among party leadership. Nadler suggested Tuesday evening the Lewandowski could be held in contempt of Congress for his conduct during the hearing.

Palmer and Sherman say Lewandowski’s testimony did not help some skeptical Democrats sign on for impeachment. “Some Democrats privately told us that Lewandowski’s stonewalling was certainly enough to hold him in contempt,” they write. “But the party is so deeply divided on what they should do next that, to many Dems, it all seemed like a circus without a clear purpose.”

The party’s divide is best illustrated by a simmering behind-the-scenes conflict between Nadler and House Speaker Nancy Pelosi (D-CA), the spokesperson for the 60 Democrats who believe impeachment will be a politically disastrous move — going nowhere in the Republican-controlled Senate and galvanizing President Trump’s base as he runs for re-election.

House Speaker Nancy Pelosi (D-CA) has been very vocal about her opposition to impeach the President. She said last week, “I’ve traveled the entire country. Come with me some time, and you’ll hear what the American people are saying. they understand that impeachment is a very divisive measure, but if we have to go there, we’ll have to go there. That’s all I’m going to say about this subject.”