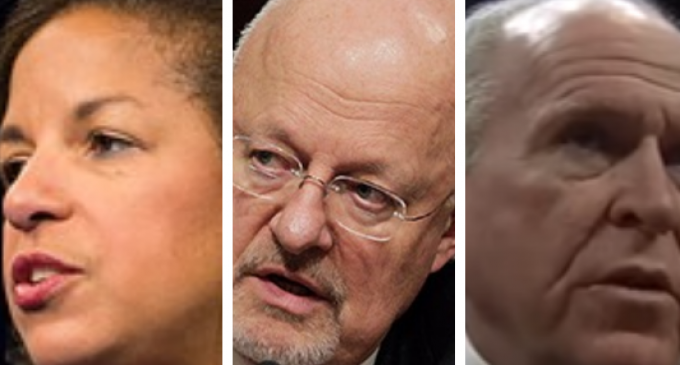 When Donald Trump won the election in November and the nation's Leftists were still in shock (including Hillary herself), it didn't take long for information (as expected) to begin gushing from the breaking dam that was holding back the Swamp and all its dirty secrets.  The information that started to spray from the dike was, at first, seemingly unworthy of scrutiny (like when the story about Trump's conversation to the Australian Prime Minister was leaked).  When the information began to take on a more private and severe tone, the administration knew then and there that something was wrong.

Enter the Trump accusation of proof that the Obama administration had wiretapped Trump Tower and its various people involved with the campaign.  This was a point when Trump and his staff assumed (rightly so) that the NSA had collected the data and someone with the authority to do so, had gone to that department and requested the “unmasking” (or revealing of the names in the metadata collected) of specific conversations surrounding Trump Tower and other officials with the campaign.  The NSA was clever enough to not specifically go after Trump's personal lines, but rather through foreign lines that were connected to Trump and his staff.  Because the information being collected was illegal, it would be much more difficult to trace back to the United States intelligence community if it were done through, say, British intelligence.

Once the unmasking occurred, that's when the leaks of personal conversations began in earnest.  It was every other day that these were being leaked and it was surely a high point in the former Obama circles to watch as the Trump team scrambled here and there to answer the controversies.  After all, that was the whole intent of the leaks:  to slow down the Trump process of destroying Obama's legacy and also stripping away any vestige of power from the Establishmentariat.

Now that the former National Security Adviser Susan Rice has decided that she will not be testifying to a House committee about this investigation in an open forum, more questions have arisen; not the least of which is why such “unmasking” was necessary and who were the specific individuals responsible for the “unmasking.”  Read the following page to see which new names have been added to the original list of those under the spotlight and how this may seriously impact the investigation.