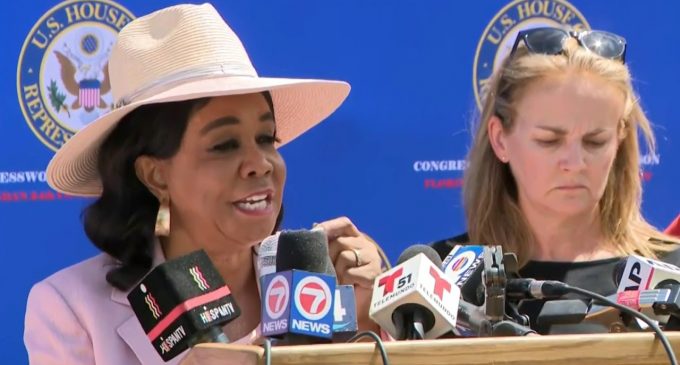 On Tuesday, Rep. Frederica Wilson (D-FL) and other members of Congress toured a detention facility for illegal immigrants. After the tour during a press conference, Wilson made the incredible assertion that people who make fun of members of Congress online are “disgraceful” and “should be prosecuted.”

“Those people who are online, making fun of members of Congress, are a disgrace and there is no need for anyone to think that is unacceptable,” Wilson said. “We're going to shut them down and work with whoever it is to shut them down, and they should be prosecuted.”

Is Wilson seriously calling for an end to free speech?

The Florida Democrat also claimed that President Trump has “taken this country to its knees” and blamed him for people losing respect for Congress and the White House.

She once accused Trump of being “hateful towards black people” and declined to participate in the State of the Union address in 2018.

The congresswoman also rose to prominence in 2017 after she leaked the conversation Trump had with the Gold Star widow whose husband died in Niger and criticized the president for being “so insensitive” after he said that the slain soldier “knew what he signed up for…but when it happens, it hurts anyway.”