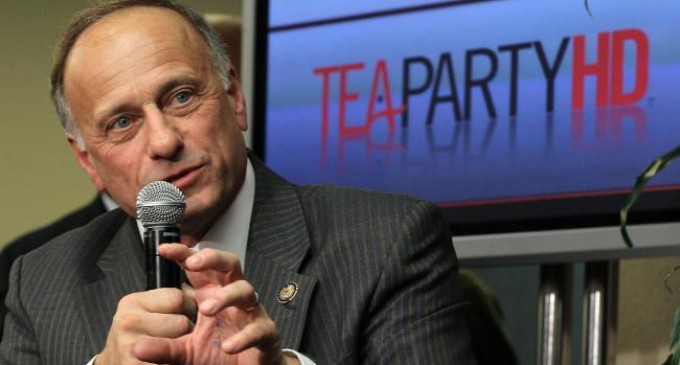 Rep. Steve King, R-Iowa states that Obama is intentionally creating the crisis at the border to fulfill 2 powerful leftist agendas:

It's called the “Cloward-Piven theory,” named after Richard Cloward and Francis Fox Piven of Columbia University, Obama’s alma mater. The idea is to overwhelm governmental systems to the point of collapse which would demand more control from the state.

Rep. King states he will go down to the border with other congressional members to assess what's really happening, that it's too difficult to see the truth within the news media because Obama is preventing border patrol agents from talking to journalists.

“I’m afraid President Obama is going to do nothing to secure our border with Mexico,” King told WND in an interview Monday. “Right now, the United States effectively has no border with Mexico and the borders in Central America all the way down to Panama appear to be wide open as well.”

King added, “President Obama appears he is going to be as ineffective at stopping the flow of unaccompanied minors crossing the border illegally as he has been preventing a civil war from breaking out in Iraq.”

“Right now DHS is denying anyone the opportunity to talk to those working in the DHS detention centers or asking any questions,” King said, “and you have to leave your cell phones outside. What I want to test is whether the Obama administration is going to deny me and a congressional delegation I bring … the opportunity to see what we want to see and ask the questions we want to ask.”

King told WND he wants to challenge the Obama administration’s attempt to keep the American people from knowing the truth about this developing crisis.

“I need to go back down to the border to see exactly how these unaccompanied minors are getting into the country,” he said. “I want to talk to the people on the ground to assess the situation. I don’t know any more than what limited information we’re getting from the news media.”

King argued, as he said last week, that Obama has manufactured the crisis in an attempt to overload the social welfare system.

He said then, “I do feel this attempt to flood the border with illegals is a playing out of the Cloward-Piven theory.”

It was in the 1960s when professors Richard Andrew Cloward and Francis Fox Piven of Columbia University, Obama’s alma mater, devised a plan to provoke chaos by deliberately overwhelming governmental systems and the U.S. economy to the point of collapse, paving the way for state intervention that would ultimately replace America’s free-enterprise republic with a collectivist system.
“If you don’t see them bring reinforcements down there to seal the border, that means that, yes, it’s a Cloward-Piven maneuver to flood the country until we get to the point where we are an open-borders country that welcomes everybody, legal and illegal,” King said at the time.
Rep. Steve Stockman, R-Texas, agreed that Obama – who studied the chaos strategy at Columbia, according to a classmate – “is trying to do a Cloward-Piven thing with the border.”

He said it’s “an open secret Obama is trying to flood Texas with illegals to make it into a blue state,” with a Democrat majority. “If we lose Texas, and it becomes like California, then the Republicans lose the chance of ever getting a Republican elected president,” the Texas lawmaker warned.
“If this [Cloward-Piven plan] isn’t part of the president’s strategy, he is completely and utterly incompetent as an administrator,” King said of his new plans for a border patrol arranged for members of Congress.

King stressed that this crisis is a crisis the White House intends to create.

“This situation on the border is not intractable,” he said Monday. “It is caused by the president of the United States of America. President Obama is engaging in the willful destruction of the rule of law. President Obama has intentionally erased our southern border, and the White House is sending messages down to Central America advertising to come here now.”