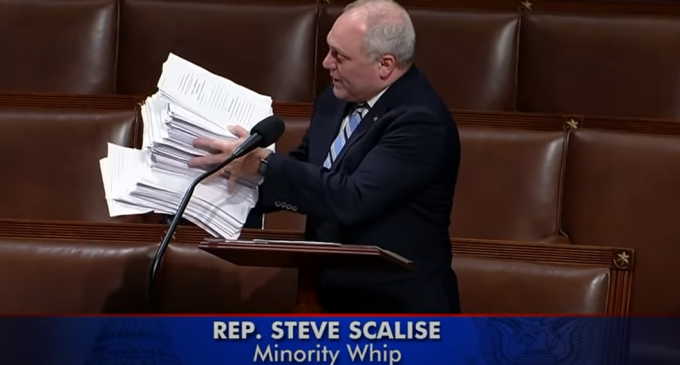 Days after calling reports of $450,000 payments to illegal immigrants separated during the Trump administration “garbage,” Biden said these illegals “deserve some kind of compensation,” although he has “no idea” what the amount would be.

“Mr. President, as you're leaving for your overseas trip, there were reports that were surfacing that your administration is planning to pay illegal immigrants who are separated from their families at the border,” Fox News' Peter Doocy said. “Up to $450,000 each, possibly a million dollars per family. Do you think that that might incentivize more people to come over illegally?”

“If you guys keep sending that garbage out? Yeah, but it's not true,” Biden responded.

“So this is a garbage report?” Doocy asked.

The ACLU said Biden ‘might not have been fully briefed' on the issue. They aren't even denying that Biden is a puppet at this point.

“President Biden may not have been fully briefed about the actions of his very own Justice Department as it carefully deliberated and considered the crimes committed against thousands of families separated from their children as an intentional governmental policy,” ACLU Executive Director Anthony D. Romero told Fox News.

“But if he follows through on what he said, the president is abandoning a core campaign promise to do justice for the thousands of separated families,” he added. “We respectfully remind President Biden that he called these actions ‘criminal’ in a debate with then-President Trump and campaigned on remedying and rectifying the lawlessness of the Trump administration. We call on President Biden to right the wrongs of this national tragedy.”

For anyone who considers that the Biden admin is trying to bring as many illegals into the country as possible, it goes without saying that reports of such gigantic payments come from the Biden admin itself, knowing that the ‘rumor' would be heard far and wide.

In a firey, late-night hearing, Rep. Steve Scalise shredded Biden’s ‘Build Back Better’ as a plan to provide amnesty to millions of illegal immigrants. Yet another siren to Central and South America, and whoever else wants to come, that not only might you get amnesty if you cross the border, we'll throw more money than you could ever hope to see in several lifetimes.