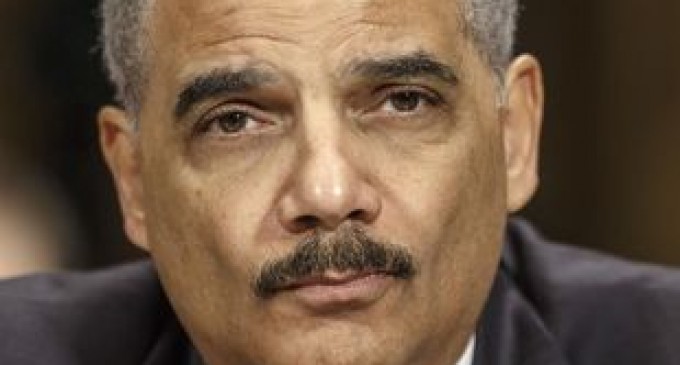 “There’s a total disregard for the rule of law,” Arizona Rep. Paul A. Gosar, states. “We can’t sit idly by here as we see the Constitution and justice being defamed right and left at the whim of the attorney general.”

“We have actually challenged the attorney general that he’s actually now complicit in violating federal code in moving illegal immigrants from one port to another port,” Gosar said. “The attorney general is the caretaker of the Constitution as well as the rule of law. He is to uphold them all, and he’s choosing not to.”

Holder's crimes are numerous, just like Obama's. Gosar is one of the very few congressman to actually be doing anything about the rampant lawlessness of this government.

Mr. Gosar’s list of what he says are constitutional violations includes the Justice Department giving the Obama administration permission to ignore the requirement of notifying Congress before transferring Guantanamo Bay detainees, Mr. Holder testifying that he was not aware of Justice’s investigation of Fox News reporter James Rosen when he in fact had signed the subpoena, and Justice’s failure to prosecute Internal Revenue Service workers who targeted conservative groups for scrutiny.

“I didn’t think that the political attacks against Eric Holder by House Republicans could get any more irresponsible, but they did when some GOP members proposed the most fundamental abuse of the impeachment power,” Rep. Adam B. Schiff, California Democrat, said in a statement when the articles were introduced. “The articles introduced against the attorney general are nakedly political, representing a laundry list of debunked conspiracy theories directed at the attorney general and the administration.”

Mr. Gosar was instrumental in 2012 in gathering congressional signatures to demand that Mr. Holder resign for refusing to comply with a subpoena for documents related to the Operation Fast and Furious gunrunning scandal, in which federal agents allowed guns to be sold to Mexican gangs. That effort led to a House vote of 255-67 to find Mr. Holder in contempt of Congress.

Mr. Holder was spared by President Obama, who claimed executive privilege in withholding the documents. As a result, Mr. Holder declined to enforce the House’s contempt citation against himself.

“High crimes and misdemeanors — both of which are criminal terms — don’t necessarily have to be confined to any particular statute or fit into a traditional definition of a crime,” said former constitutional law professor Herbert Titus. “So there’s a bit of discretion here in terms of the House filing the charge because of the political nature of the process.”

Four charges are presented in the articles for impeaching Mr. Holder: refusing to comply with a subpoena relating to the Fast and the Furious documents; failure to enforce several federal laws, including the Defense of Marriage Act, the Controlled Substances Act and the Anti-Drug Abuse Act of 1986; refusing to prosecute federal officials in the IRS scandal; and providing false testimony under oath about the Justice Department’s investigation of Mr. Rosen.

“Do I think that the House ought to explore the issues? Yes, I do,” said Mr. Titus, a former federal prosecutor. “There are sufficient indicators out there that Mr. Holder has ignored his constitutional duty, but it needs to be done carefully, and I think the House knows that.”

Members of Congress may want to tread lightly because of the highly political nature of the proceedings, said Bruce Fein, the legal scholar who is known for drafting articles of impeachment against President Clinton for perjury after he lied under oath about having sexual relations with an intern.

“In some sense, all impeachment is political,” Mr. Fein said, adding that Mr. Holder has taken several actions that are worthy of investigation.

Where it gets political, he said, is that several people in the Obama administration could qualify for impeachment hearings, such as Director of National Intelligence James R. Clapper, who admitted he lied or wasn’t fully truthful in his testimony to Congress, and Mr. Obama for allowing a “hit list” of American citizens with terrorist ties to be targeted in drone strikes without due process.

‘Rule of law is being usurped’

Many Democrats were willing to sign on the contempt charges against Mr. Holder, and Mr. Olson thinks he may be able to persuade some Democrats in competitive races this year to endorse his impeachment effort.

Although most Democrats have been reticent to criticize Mr. Holder, Rep. Jared Polis of Colorado went on record last year saying he would be “very happy” if the attorney general resigned.

House Republican leaders also have been reluctant to take on the initiative, although if Mr. Olson and Mr. Gosar collect enough signatures, Speaker John A. Boehner, Ohio Republican, said he would bring it to the floor for a vote, Mr. Olson said.

A simple majority in the House is needed to impeach. If the measure passes, it moves to the Senate, which decides to convict or acquit. A conviction requires a two-thirds vote and removes the person from office.