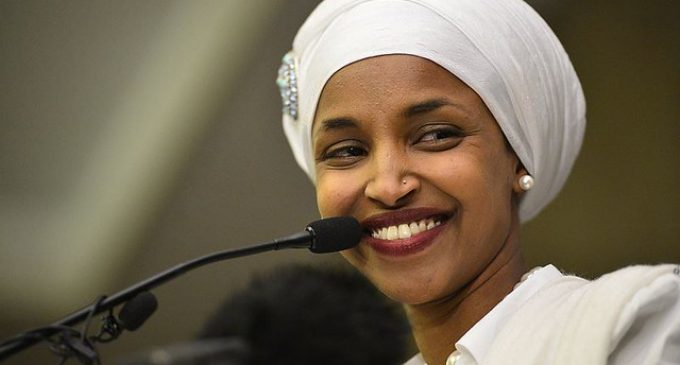 A profile of Rep. Ilhan Omar (D-MN) recently published by the Washington Post reveals that she lied when speaking to several hundred high school students in attempting to illustrate ‘American racism, cruelty and injustice.’

The freshman lawmaker told 400 Minnesota students that America didn’t meet her expectations upon arriving here from a Kenyan refugee camp.

“I grew up in an extremely unjust society, and the only thing that made my family excited about coming to the United States was that the United States was supposed to be the country that guaranteed justice to all,” Omar told the students, according to the Post. “So, I feel it necessary for me to speak about that promise that’s not kept.”

She claimed to be an “extreme other” after arriving in America at age 12. “I was black. I was Muslim. I also learned I was extremely poor and that the classless America that my father talked about didn’t exist,” she said.

She then told them a story about being in a courtroom that she later admitted was not entirely true.

The freshman representative told 400 high school students she was sent to a Minneapolis courtroom where she witnessed a “sweet, old … African American lady” who spent the weekend in jail for stealing a $2 loaf of bread to feed her “starving 5-year-old granddaughter,” according to the Washington Post. Omar says she screamed “Bullshit!” in the court room after the woman was fined $80 for the crime.

“I couldn’t control my emotions,” Omar told the crowd, “because I couldn’t understand how a roomful of educated adults could do something so unjust.”

The Post had several pieces of evidence indicating Omar was not entirely truthful about this experience.

“Omar’s story echoed the plot of ‘Les Miserables.’ If true, it is also probably embellished,” wrote Greg Jaffe and Souad Mekhennet, the author’s of the Post‘s article.

“City officials said that police aren’t allowed to arrest people for shoplifting unless there’s a likelihood of violence or further crime. Typically, shoplifters are sentenced to attend a three-hour class.”

Asked about the story, Omar admitted “she may have flubbed some facts,” Jaffe and Mekhennet wrote.

Omar has also been dinged recently by the Post and others for “botched basic facts” during her attempts to “go viral.”

What does it say for the actual amount of racism that she has experienced since being in the United States seeing how she had to use a fictitious story?