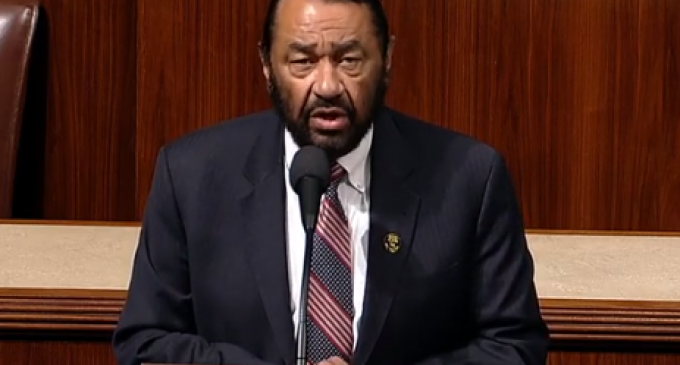 Rep. Al Green (D-TX) had some very big words for President Trump speaking on the floor of House of Representatives Thursday. Green was hitting back after the President referenced him without name during his rally in Panama City, Florida Wednesday night, telling the crowd, of impeachment, that “They think they’re going to win, and if you see the one man, he said ‘It’s the only way we’re going to beat him in 2020,’ to have to do this. The only way.”

“Last night, at a rally in Florida, the president referred to me as ‘that man,’ Green said. “Mr. Speaker, I love my country, and still I rise. And I rise today to address the comment that the president made in referring to me as that man.”

“But I do want to share with the president that he is right, I am that man,” Green continued. “I’m that man, a liberated Democrat, a liberated Democrat in the spirit of Shirley Chisholm. I’m unbought and unbossed. Mr. President, you finally encountered at least one person that your money can’t buy and your power doesn’t scare.”

Green then promised President Trump that he has “a date with destiny,” and that “You are not above the law. No one is. Impeachment is in the hands of this Congress.”

“Mr. President, I assure you that the long arm of the law is reaching out for you,” Green said. “In this country, we will not allow you, or any other person, to hold yourself out as being above the law. You have an appointment with history in this House of Representatives. If no one else will bring you to justice, I will, Mr. President.”