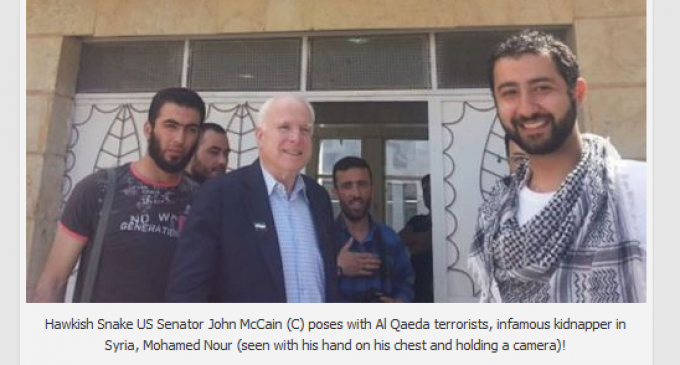 John McCain, along with the Obama administration and most of Congress are traitors of this country!

Rep. Louie Gohmert (R-TX) said Sen. John McCain “supported al-Qaeda” at a Values Voter Summit held in Washington during the week of Oct. 7, The Hill reported on Oct. 16. Gohmert said, “Over in the Middle East, we talk to allies and they wonder which one of us are going to be the next ones that you throw under the bus… I just heard … some senator from Arizona — a guy that liked [former Libyan dictator Moammar] Gadhafi before he wanted to bomb him; a guy that liked [former Egyptian strongman Hosni] Mubarak before he wanted him out; a guy that's been to Syria and supported al-Qaeda and the rebels…” “But it's not the first time he's [Gohmert] has accused McCain of having ties to terrorists,” The Hill reports. “In May, Gohmert said McCain and President Obama were partly responsible for the deadly attack on the U.S. diplomatic post in Benghazi, Libya, in 2012. Four Americans, including U.S. Ambassador to Libya Chris Stevens, died in the attack,” says Hill reporter Jonathan Easley. Again, Al-Qaeda's murders of Stevens and other Americans do not rest easy on Obama.