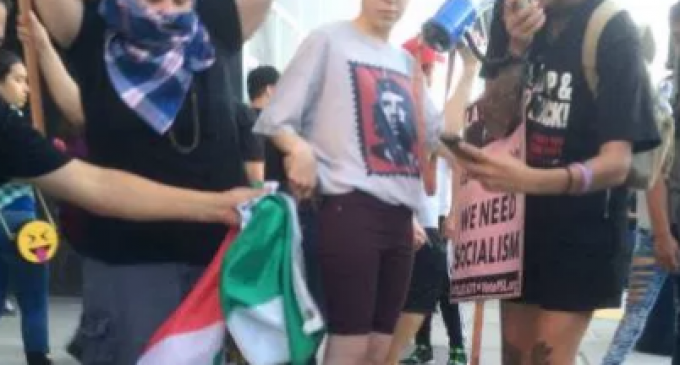 Each time the “Make America Great Again” campaign arrives in town, so does a mob of riotous protesters,  organized and ready to provoke Trump supporters.  The number of protestors in San Jose and the way in which they have acted in concert, moving violently against Trump supporters, while having the support of the media demonstrates a puppet master, pulling the strings of the proletariat pawns and the liberal press.

“Trump incites riots wherever he goes!” reports the media, while failing as journalist to uncover the fact that the protesters are paid protestors and on the Soros payroll.  Perhaps, it is because the major news organizations are also bought and paid for by Soros.

On professional protester, who has been photographed at numerous events, Maile Hampton, a self-described “Marxist-Leninist” and known as KwameKahlo on Twitter, was at the San Jose event, seen burning a Trump hat and holding a “We Need Socialism” sign. In the past 10 days, Maile has been actively protesting at UC Davis and even in Mexico protesting labor conditions for farm workers.

Only a week later, Maile was at the California State Capitol working for the what used to be the ACORN group, Alliance of Californians for Community Empowerment and demonstrating “in favor of increasing the minimum wage to $15 per hour.”

These ‘professional protestors’ are nothing but 21st century carpet baggers who ride the waves of social chaos created by Soros-funded organizations that use them as useful idiots – in actuality, they help propagate the very conditions they claim to protest against, writes Truth and Action.

The rest of the story can be found on page two.