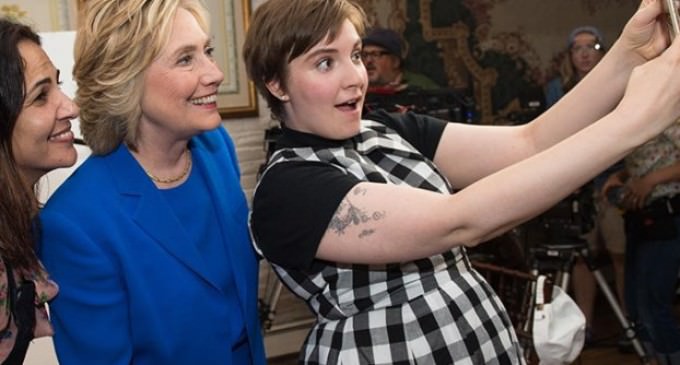 From the files of “You Can’t Make This Stuff Up” comes the news that Lena Dunham, the profane, crude, self-absorbed actress who has somehow caught on with the Left and young, air-headed young women, has announced that she will campaign for Hillary Clinton to become president of the United States in 2016.

Dunham wrote a disjointed, vacuous memoir recently in which she accused a male student of raping her while she was in college. Though her description of the perpetrator was veiled and imprecise, it had the outrageous spin that he was a prominent student Republican organizer, along with enough information for the media to actually track down the person Dunham had said was the one who raped her.

Through process of elimination and various interviews, the man who Dunham blamed was found, and he suffered harassment and vilification for weeks while the story was being examined. He vociferously claimed his innocence, and with further investigation it was discovered that Dunhams story could not have been true. The event she described had not happened, the man she named had no relationship to Dunham, and for weeks during the investigation Dunham stood mute without admitting to her lie.

It was, in essence, an assault on an innocent man, but it fit her narrative that men and Republicans are evil, or at least sexual predators, and while she played the victim, it turned out that she was the one guilty of harassment, dishonesty, and character assassination.

And yet she remains the darling of the Left and feminist groups. Now she is anxious to become involved in the political scene by helping choose our next president.