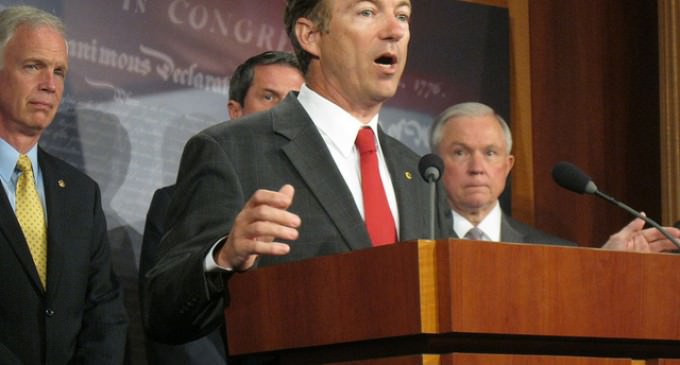 While visiting a Manchester pub in New Hampshire, Rand Paul replied to one in a crowd that had gathered around him who asked about actions he would take to restrain the presidency, specifically on executive orders, if he should become president.

Paul continued, “Democracy is messy, but you have to build consensus to pass things. But it’s also in some ways good, because a lot of laws take away your freedom. So it should be hard to pass a law. And it, frankly, when you do it the proper way, is. We’ve done way too many things [the wrong way]: Signing statements, altering legislation by the president, are wrong and unconstitutional and shouldn’t happen. Executive orders shouldn’t either.”

What is your opinion of Rand Paul?

MANCHESTER, New Hampshire — In front of a boisterous pub crowd of young voters here, Sen. Rand Paul (R-KY) ripped into President Obama over executive overreach and even vowed to repeal “all previous executive orders” in one of his first acts as president, should he run.

Paul’s comments came to the New Hampshire chapter of Generation Opportunity, a national grassroots conservative group with a libertarian appeal with thousands of young liberty-minded activists nationwide engaged through it.

Paul focused much of his remarks on executive overreach by President Barack Obama, saving some of his most interesting points for a question-and-answer session at the end.

“There’s a rumor going around you might run for president in a couple years,” a young man shouted as Paul took questions from the audience for several minutes after a 15-plus-minute speech.

“I think the first executive order that I would issue would be to repeal all previous executive orders,” Paul replied to resounding cheers through the Manchester pub, named for the beer bearing the namesakes of American revolutionary Sam Adams. “Democracy is messy, but you have to build consensus to pass things. But it’s also in some ways good, because a lot of laws take away your freedom. So it should be hard to pass a law. And it, frankly, when you do it the proper way, is. We’ve done way too many things [the wrong way]: Signing statements, altering legislation by the president, are wrong and unconstitutional and shouldn’t happen. Executive orders shouldn’t either.”

“Absolutely,” the man shouted back at Paul. “You should run.”

While he's not officially running for president – yet – Paul recently told Breitbart News he will decide whether to make a bid for the Oval Office by next spring, and his trip to New Hampshire, the site of the nation's first presidential primary, is one of many trips he's taken to key states over the past two years.

In a brief interview with Breitbart News outside after the speech and question-and-answer session, Paul said he thinks the president’s executive overreaches are massively unpopular nationwide and will have electoral consequences for candidates in races ranging from this year’s Senate races to 2016’s presidential contest.

“I’m very serious that the biggest problem with President Obama is his usurpation of power, destroying the separation of powers and not believing there are any checks and balances and believing that the executive branch can do whatever it wants—and this is exemplified in immigration, Obamacare and more—but really it’s the most seriously destructive thing he’s doing to this country,” Paul said. “While Obamacare’s bad, Dodd-Frank is bad, immigration is bad, the problem is is he’s doing it in an unconstitutional way. You can see how the crowd really understands that. The problem is he’s acting like a legislature.”

Before Paul spoke at the event, his staff kicked out liberal operatives there to videotape him to use it to attack him—called “trackers” in professional politics—from American Bridge.

“They say that if you’re not drawing flak, you’re not over the target,” Paul said when asked for his reaction to the fact that liberal groups like American Bridge are targeting him. “So I think that they’re sensitive, and I think they’re also very aware—and I didn’t get into it so much tonight, but I think that my discussion of Hillary Clinton and the disaster that she was a part of in Libya in Benghazi and now with the chaos in Libya—that that’s really hitting the mark and that she’s going to have a tough time really getting beyond that and they’re really sensing that. They’ll get more of it tomorrow too.”

Paul’s reason for being in New Hampshire is a series of events he’ll attend with Scott Brown and other Republican candidates on Friday, including a post-primary “unity breakfast,” to unite the party here behind Brown heading into November's battle with Sen. Jeanne Shaheen (D-NH). But it certainly didn’t hurt a likely 2016 candidate like Paul to hit up the bar with conservative college-age or just-out-of-college kids from Manchester while in town.