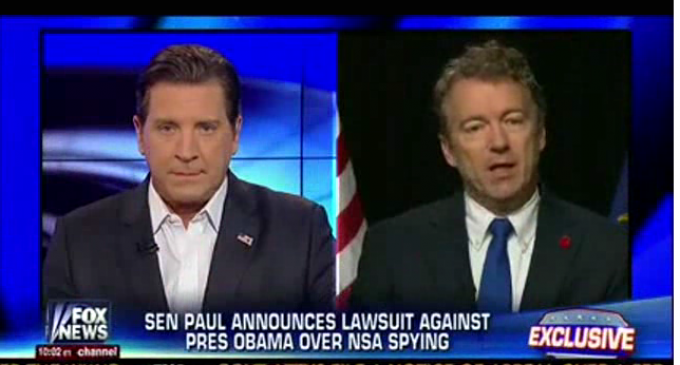 Sen. Rand Paul (R-KY) is creating a class action lawsuit against Obama himself for the NSA abuses of our Constitutional rights.

‘If you have a cell phone in America’ can join the class action suit, according Senator Paul.

The Senator states he wants to overwhelm the government and have the secret rulings of the FISA Court, the court that authorizes the anti-Constitutional rulings for NSA surveillance, be made public.

Sen. Rand Paul (R-KY) said the grassroots in America will “overwhelm” the federal government and President Barack Obama’s administration by signing up for his class action lawsuit against Obama himself over the National Security Agency (NSA) spying on American citizens.

“Well, the thing about it is the question here is whether or not constitutionally you can have a single warrant apply to millions of people,” Paul said in an exclusive interview with Fox News’ Eric Bolling on Friday evening shortly after 10 p.m.

So we thought what better way to illustrate the point than having hundreds of thousands of Americans sign up for a class action suit. Six months ago, we began this call. We now have several hundred thousand people who want to be part of this suit to say to the government and to the NSA ‘you can’t have our records without our permission or without a warrant specific to an individual.’ So, it’s kind of an unusual class action suit in that we think everybody in America who has a cell phone would be eligible for this class action suit. If any of your viewers have a cell a phone, they just have to go to my Facebook tonight and they can sign up to be part of the lawsuit. We want to overwhelm the government and we want to show publicly that hundreds of thousands of people object to the government looking at our records without our permission.

Paul confirmed to Bolling that former Virginia Attorney General Ken Cuccinelli will be leading his legal team’s efforts against President Obama. “Yeah, Ken Cuccinelli is the former attorney general of Virginia,” Paul answered when Bolling asked if Cuccinelli was going to be on the team. “He was also the first attorney general to file a lawsuit against Obamacare. And he’s joined our legal team. He has constitutional expertise. We’re hoping with his help we can get a hearing in court and so that we can get this class action lawsuit, I think the first of its kind, all the way to the Supreme Court.”

Paul said the goal of the lawsuit is to force the Obama administration to follow the constitution, specifically the Fourth Amendment. “We want them to protect the Fourth Amendment,” Paul said. “We want them to protect the right to privacy. We want them to understand that we’re not willing to trade our liberty for security. We think we can have security and we can defend against terrorism but that doesn’t mean every individual American has to give up their privacy. We think we can have both. But we are very upset that this president doesn’t seem to be too concerned with our right to privacy.”

When Bolling asked Paul if Director of National Intelligence James Clapper should be prosecuted for a factually inaccurate statement he made to Congress in 2013, Paul said he thinks so. Clapper denied during a congressional hearing that the NSA had engaged in collection of Americans’ records–something that has been proven to be untrue.

“Lying to Congress is a felony,” Paul said.

I don’t think we can pick and choose the law. We’ve got all of these people like James Clapper and others beating the table and saying that “we want to put Edward Snowden in jail for life,” and yet they don’t want the law applied to themselves? You know, the law has to be applied equally and that is one of the real tenets of American jurisprudence—you apply the law equally. I frankly think it would be somewhat enlightening for James Clapper and Edward Snowden to share a prison cell and then maybe we’d all learn a little bit from that.

Paul rounded out the interview by imploring Americans—anyone with a cell phone—to join his class action lawsuit. “If you go to my non-governmental Facebook page, you can sign up there,” Paul said. “You can go to RandPAC and sign up there as well. There are several different venues. But if you have a cell phone in America, and you’re unhappy about the government looking at your data or your records and possibly your content come to my Facebook page and sign up because we’d love to have you on the class action lawsuit.”