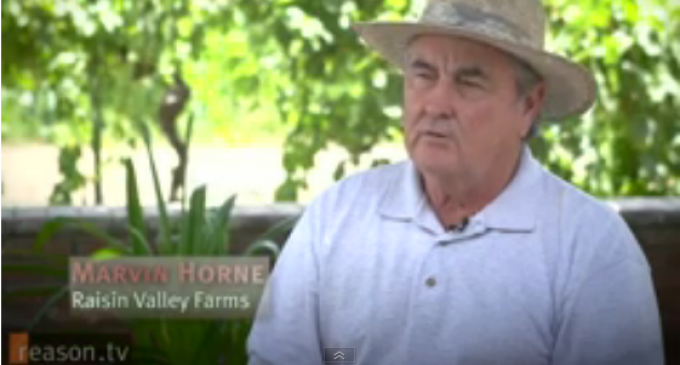 The USDA takes 47% of raisin farmers crops, doesn’t pay them for it, and fines them severely if they resist.

All US raisin farmers are required to give a portion of their crop to the feds under the 1930s Agricultural Marketing Agreement Act. The feds keep the raisins in reserve to jack up prices to keep the market from collapsing, they claim.

Losing half their crop to the feds are causing farmers to lose their land.

Fed up with this theft, one California raisin farmer, Marvin D. Horne,  stopped handing their crop over to the feds and got slapped with $700,000 in fines. He and other farmers sued because the 5th amendment states that if the government takes your property you must be compensated.

They lost their first case because the raisins weren’t ‘physically seized’ by the government. They have appealed and still await their day in court.

Here we have another clear case where the federal government steps into a market and steals from citizens using some flimsy excuse for doing so, in this case based on price controls issued way back during the Great Depression.

The politicians utilize private industries for these activities, which employ their cronies who surely give ‘kick backs’. Everyone is on the take, lining their pockets with money that should be going to the hard working farmers.

The federal government can prevent American farmers from participating in the free market, the US Ninth Circuit Court of Appeals has ruled.

“I didn’t choose to fight, all I did was to choose to pack and market my own raisins,” California raisin farmer Marvin D. Horne said. Horne and his wife Laura Horne are facing $700,000 in fines for refusing to follow the rules made by the Raisin Administrative Committee, which in 2002-03 told raisin formers to turn 47 percent of their crop over to the committee, which markets the produce for them. Of the raisins that were turned over, farmers got paid for only half.

The percentage fluctuates from year to year; in 2003-03, farmers had to turn over 30 percent of their raisins.

All US raisin farmers are required to turn a portion of their crop over to the committee under a 1930s law called the Agricultural Marketing Agreement Act. The farmers are not paid for the raisins, but instead the raisins are held in reserve in an effort to jack up prices and to keep the market from collapsing

Farmers such as the Hornes contend that they have not been paid for the raisins held in reserve for many years. They also contend that the program is driving many farmers out of business. Leighton alleged that the raisins are turned over to politically connected packers who sell them at a low price and make a profit.

“It was a theft. The reserve was nothing but highway robbery,” Marvin Horne said. “They want us to pay for our own raisins that we grew.”

“There are already farmers that have lost their land,” Laura Horne. “You cannot work for a whole year and give 47 percent of what you made away and keep that business afloat.”

The raisin program was created during the Great Depression when politicians feared that low crop prices would drive farmers out of business which would lead to social and political unrest. Ironically enough the program was originally created to keep farmers in business.

To the Supreme Court and Back

Leighton sued the USDA on behalf of the Hornes and other farmers. His contention was that the raisin reserve violated the takings clause of the Fifth Amendment to the US Constitution which requires government to compensate citizens for property it takes.

“Property rights are bundles of rights,” Leighton said. “The ability to possess, keep, give away, sell ownership. When they take title to your raisins you can do none of that.”

The Ninth Circuit Court of Appeals initially ruled that the reserve program was not takings because the raisins were not physically seized. Instead, it merely stated that the Hornes had simply violated federal farm regulations and the case was one of a simple fine.

Leighton appealed to the US Supreme Court, which ruled that the Ninth Circuit had to consider Hornes’ Fifth Amendment. The Ninth Circuit Court upheld the Raisin Reserve program again on May 9 this year.

Court Claims it has No Authority to Rule on Regulations

In its ruling the Ninth Circuit claimed that it has no constitutional jurisdiction over agricultural regulations.

“While the Hornes’ impatience with a regulatory program they view to be outdated and perhaps disadvantageous to smaller agricultural firms is understandable, the courts are not well-positioned to effect the change the Hornes seek, which is, at base, a restructuring of the way government regulates raisin production,” Judge Michael Hawkins wrote in the court’s opinion. “The Constitution endows Congress, not the courts, with the authority to regulate the national economy. Accordingly, it is to Congress and the Department of Agriculture to which the Hornes must address their complaints. The courts are not institutionally equipped to modify wholesale complex regulatory regimes such as this one.”

Case Heading Back to Supreme Court

The case appears headed back to the Supreme Court. If the last round of arguments is any indication, the Hornes will win.

Justice Elena Kagan described the act as possibly “the world’s most outdated law.”