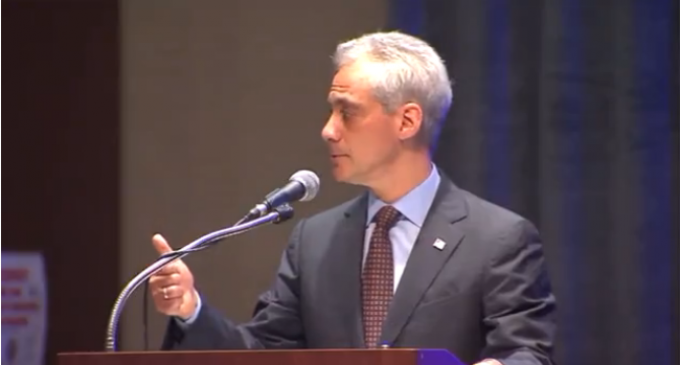 Chicago Mayor Rahm Emanuel introduced an ordinance Wednesday that would prohibit gun stores from operating within 99.5% of the city.

Stores would also be prohibited to sell more than one handgun per buyer per month, must open their books to police for inspection “at all reasonable times” and even videotape all gun sales.

CHICAGO (AP) — Forced by court order to allow long-banned gun stores to open in Chicago, Mayor Rahm Emanuel on Wednesday introduced an ordinance that is so strict and so dramatically limits where the stores can operate that critics say it is little more than a continuation of the city's longtime ban.

In a city that for years has been at the center of national debate over gun control and gun violence — even before its decades-old handgun ban was invalidated by the U.S. Supreme Court in 2010 — the ordinance will almost certainly trigger a legal fight.

After the ordinance was introduced at the City Council meeting without comment, Emanuel said he believes he is on solid legal ground with what he called a “tough, smart and … enforceable” ordinance. It comes after a federal court ruling in January gave Chicago until July 14 to put gun store rules in place.

Emanuel said that in Chicago, where gun violence remains a headline-grabbing issue, “gun control is essential to our public safety.” But in recent years courts have struck down city gun laws as well as the state's ban on concealed-carry permits.

Under the ordinance sent to the council's Public Safety committee, gun shops would be prohibited in 99.5 percent of the city. Stores also would not be allowed to sell more than one handgun to individual buyers per month and must open their books to police for inspection “at all reasonable times.”

One provision certain to be examined closely by gun rights advocates is the requirement that gun stores have a video record of all transactions. But Emanuel said he believes it is legal, comparing it to cameras that record people making transaction at an ATM.

“When it comes to guns and gun violence, I think we need to err on the side of being stricter (and) push the envelope of the legalities of it,” said Moreno, who added that he expected the ordinance will become law and for it to be challenged in court.

Richard Pearson, the executive director of the Illinois State Rifle Association, said he believes someone will sue if the measure comes into force.