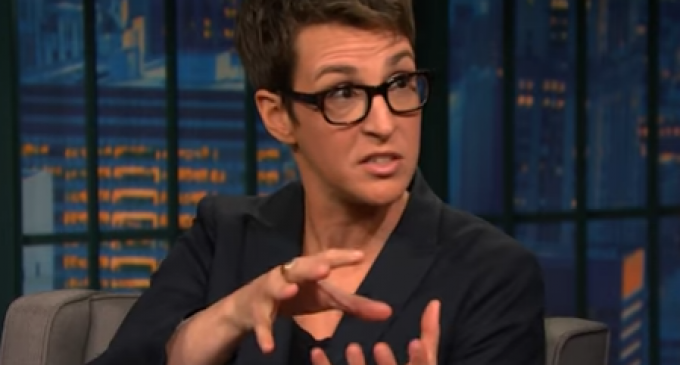 Rachel Maddow, MSNBC darling of all things Leftist, was on Late Night with Seth Meyers (also an NBC program) to chat about Trump and his administration.

In the last few weeks, Meyers' show has taken a hit in the ratings, so it's no wonder that network officials decided to fly Maddow into town in order to help out the floundering late night spot.

What many do not understand about late night television is that we no longer live in a society where network television itself is as important as all other mediums.  The big five networks are anything but and their condescension toward Fox News Channel and Rush Limbaugh's radio program are all bark and no bite.

NBC itself is as useful to a modern American viewing audience as a pitbull without teeth.  As an example of the comparisons of the networks versus one of Leftists' most hated enemies, Rush Limbaugh, it's estimated that the Tonight Show reaches about 3M people a night, whereas Limbaugh reaches in excess of 20M a day.  It's a good bet that every one of those 3M people are committed Leftists, Communists, Fascists, Socialists and Progressives.

As for Late Night with Seth Meyers?  His show draws about one-and-a-half million viewers a night.  Yes, that's 1.5M…

So, as you can see, NBC's proud peacock appears to be molting at an alarming rate, it's rainbow tail feathers lately just appearing blue.

Bringing in Maddow to assist in resuscitation is a desperation move, but hey, they should be allowed one or two Get-Out-Of-Jail-Free cards every couple of weeks, right?

What was her very riveting topic of interest on this show?  Well, a subject matter that has been allowing the formerly-State-controlled Leftist media to flourish in these dark and uncertain Liberal times:  Donald Trump.

You see, without Trump, Leftist media has no basic foundation on which to rest.  Normally, there are four pillars on which rest the tenets of a good network format:  Research, Advertising, Audience, Ratings.  Donald Trump is providing all of the above for Liberalism and it's a very strange tango indeed.  The love-hate fest of the media with President Trump is almost painful to watch.  You can see that they MUST follow his exploits while at the same time are secretly cheering for his assassination.

Seth Meyers, very friendly and timidly approachable as always, set up the MSNBC propagandist by asking her a series of softball questions regarding the Trump administration.