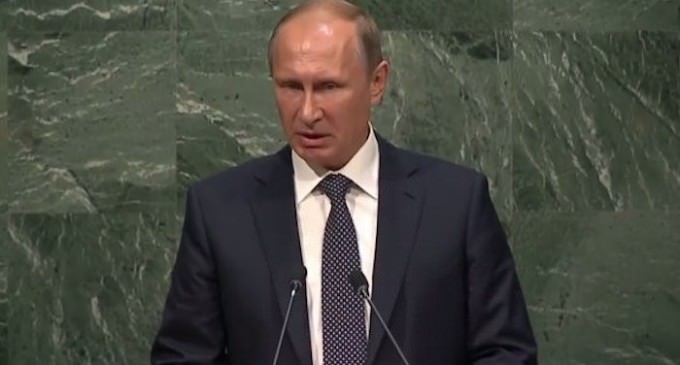 It is sad that Obama, Clinton and Kerry have so messed up the Middle East with their “Arab Spring” that Vladimir Putin becomes the hero who brings order out of the chaos.

Putin, allies with Assad. His relations with Iran are improving. (Hey, you don’t see masses of people in the streets of Tehran shouting “Death to Putin! Death to Russia!”) Russia sees Syria as a strategic location. They have moved military to the Syrian border. Putin believes Obama’s fingers in the Middle East have left a vacuum that ISIS is filling. Putin is closely aligned with how many American conservatives view Obama’s bungling of it. More bungling on the next page.

From Putin’s UN speech:
Instead of the triumph of democracy and progress, we got violence, poverty and social disaster — and nobody cares a bit about human rights, including the right to life. I cannot help asking those who have forced that situation: Do you realize what you have done?”

A report at Jihad Watch answers:

No, they don’t realize what they have done, and they’re poised to do more of it. And those of us who warned at the time that the “Arab Spring” would not lead to “the triumph of democracy and progress,” but to “violence, poverty and social disaster,” were dismissed and derided as racist, bigoted “Islamophobes.” And no matter how often the establishment analysts get things wrong, and disastrously, and fatally so, they never get called to account, and keep applying the same failed solutions.

Two choices: Either the Obama regime, who encouraged what they named the “Arab Spring” knew exactly the fallout, and wanted to destabilize the Middle East. Or the Obama regime is delusional and really thought having “JV Team”, ISIS, fill the vacuum. That’s a good thing.

Whatever you think of Putin, he is right about Obama. No easy answers, but with pro-Arab apologists like Samantha Powers as Ambassador to the UN, a real confidante, who has the ear of the President, and was one of the architects of the Arab Spring, you can bet what happens next will be more of the same.

Perhaps after Putin is through eliminating ISIS over there, we can invite him here to take on the tens of thousands of Syrian Islamists that Obama is inviting in.