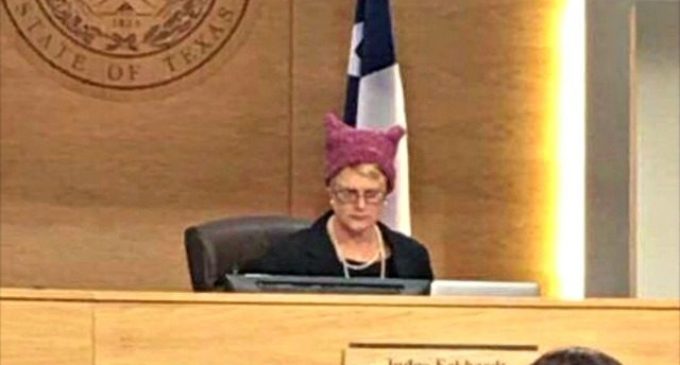 Over the past eight years, Barack Obama has transformed the justice department into a liberal activist branch of the federal government. Now, they're not even trying to hide their political leanings.

Earlier this week, Donald Trump nominated a young constitutionalist judge to the Supreme Court. His pick, Neil Gorsuch, is so uncontroversial that even Rachel Maddow called him “relatively mainstream.” When Gorsuch was nominated to the 10th Circuit Court of Appeals in 2006, he was confirmed by unanimous voice vote.

But that doesn't mean the Democrats aren't feigning outrage. Mere moments after Gorsuch's Supreme Court nomination, many Democrat senators vowed to block his nomination on the grounds that he is too conservative to serve impartially.

Meanwhile, those same Democrats don't seem to be troubled that lower courts are being controlled by leftist jurists that wear their progressive activism with pride. One such judge was recently spotted wearing the Women's Day March “pussy hat” in her Texas courtroom.

Read about the potential consequences that judge may face on the next page: