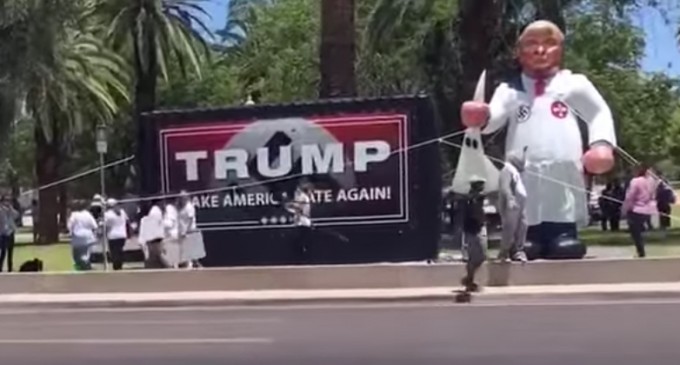 With Donald Trump making a campaign stop in Phoenix, Arizona, the city has predictably become home to agitators opposed to the presumptive GOP nominee.

As noxious as they might have been, the protestors shockingly refrained from the kind of violence that has become a regular feature of anti-Trump demonstrations in cities from Chicago to San Jose. Instead, they seemed to stick to inflammatory rhetoric and dubious claims about Trump's beliefs and character.

For instance, some of the protestors installed an inflatable figure that resembled the candidate in a Ku Klux Klan Grand Wizard's outfit. Behind the figure was a sign reading “Make America Hate Again” over a Nazi flag, driving home the point that the protestors believed Trump to be morally and politically equivalent to Adolf Hitler.

In case this weren't obvious enough, some of the demonstrators stated as much when confronted by a reporter for Infowars, arguing that the Donald's proposed temporary ban on Muslim entry into the US resembled Hitler's policies towards the Jews. Tellingly, they failed to name the specific Nazi policy that paralleled Trump's proposal.

See videos of the protests for yourself on the next page: