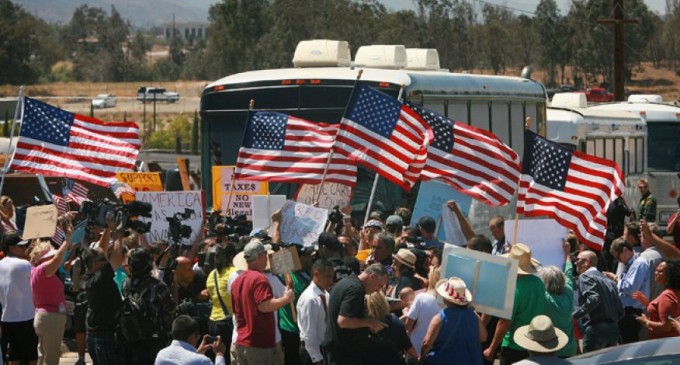 3 bus loads of illegal immigrants were turned back when protesters in a San Diego suburb took to the streets and denied them entry into a processing center.

Yes, people are still capable of taking matters into their own hands when government fails…if we could only see this on a grander scale to reel back this out-of-control government.

It would certainly be great to provide everyone in the world with nice living conditions when their governments steal and fail them, but we as a nation can't. And the truly sad thing for these immigrants, these children, is that they are unknowingly walking into a country with a failed economy, a growing police state, and out of control communist federal government that is only using them to further deflate the nation in order subjugate it to their despotic agenda and likely through the use of civil war or martial law to do so.

Word to those of you took the bait and came into our country, if the government that beguiled you into coming here has their way, believe me, you will be better off where you were…at least with all your family.

Fears of disease, crime and already-strained government services prompted Murrieta, Calif., Mayor Alan Long to rally residents against plans by the Department of Homeland Security to bus the children and families to a processing center in the city of 106,000 residents. Confronted by the protests, the buses were rerouted to San Diego.

“These people are fleeing a less desirable area — we all understand that, we're compassionate for that, but those are concerns,” Long told Fox News. “We've asked a lot of questions, we wanted to make sure no stone went unturned so that we had certainty on what exactly we were getting. And when you start asking about the health screening that they claim they get — there's a lot of gaps. They could not answer a lot of questions we had to give us certainty that the people on those buses were healthy.”

“We don’t have the space to hold them.”- Border Patrol agent

The three buses were trailed by a half-dozen news crews during the two-hour trip from the border to Murietta. After the buses were blocked, federal authorities rerouted the vehicles to a freeway and then to a customs and border facility in San Diego within view of the Mexico border.

Many protesters at Tuesday's event held U.S. flags, while others held signs reading “stop illegal immigration,” and “illegals out!”

“We can't start taking care of others if we can't take care of our own,” protester Nancy Greyson, 60, of Murrieta, told the Desert Sun newspaper.

The episode could be played out in communities around the country in the coming days, as DHS grapples with the crowds streaming across the border from Mexico. Processing facilities that are supposed to screen immigrants for health, criminal history and legal status are reportedly so overwhelmed that they are sending illegal immigrants by buses and planes around the country, looking for places to hold them while they are processed.

One longtime Border Patrol agent told Fox News the situation is well past the crisis point.

“We are overwhelmed with [people] coming out of Texas,” he said. “We are putting them in hotels, anywhere we can find a bed. We process them, and then they either bond out or are released on their own recognizance. We don’t have the space to hold them.”

More than 52,000 unaccompanied children have been detained after crossing the Texas-Mexico border since October in what President Obama has called a humanitarian crisis. Many of the illegal immigrants are under the impression that they will receive leniency from U.S. authorities.

“Claims these immigrants have a ‘credible fear’ of violence coming home are a flat-out lie,” the Border Patrol agent said. “The kids say they are here to see their mother, father or relative. The adults are working from a script. They all use the same words. When you dig deeper, they tell you the truth. They are here because a relative told them to come. They are here because they’ve been told they can stay. And it's true. We are giving them a free pass. It is terribly frustrating for us who were hired to enforce the law.”