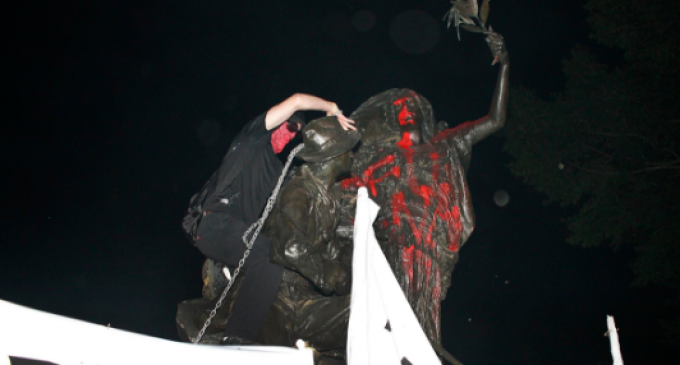 The Constitution is being reconstituted through monumental stupidity. And no none of this metaphorical. A Machiavellian type conspiracy is afloat to alter our perceptions of reality and our God given rights.

“Power is in tearing human minds to pieces and putting them together again in new shapes of your own choosing.”

It’s funny, and not the humorous definition. But, rather the peculiar and odd. The people who brought us the Women’s March and the pussy hats are the ones bringing us BLM and Antifa. We can no longer speak in metaphors when we refer to the monumental stupidity sweeping our nation. And have we stopped to thoughtfully consider where this is taking our country? To the simple minded, our nation is up in arms over the presence of stones carved 100 years ago. These are lies. The lies you've been groomed from infancy to believe. Through the fluoride, the constant cycle of fake news and politically correct measures defying the laws of rationality, designed to create cognitive dissonance in the masses. To bring us to the point where we can no longer tell reason for blasphemy, truth from lies, and willingly offering up our hands to be shackled to the pillars of globalism.

The situation witnessed in Atlanta when a mob of social justice warriors started tearing down monuments celebrating peace and reconciliation, mistaking them for emblems of the Confederacy, reveals the power the communist left holds over their followers has never been stronger. They've torn down their minds, and rebuilding their sheep to believe in a fraudulent narrative of history in order to gain global power. Get the full story on this group of social justice warriors idiotically tearing down symbols of peace, reconciliation and harmony to end racism on the next page. Hurry before this state of affairs progresses and Google no longer permits the true history of the peace monuments in Atlanta to exist on the internet.