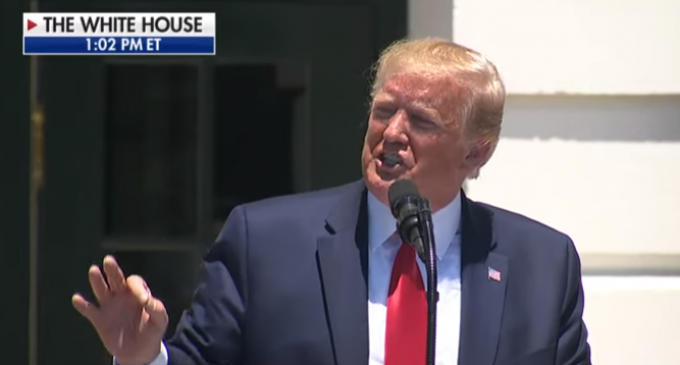 President Trump caused great controversy with his trio of Tweets sent Sunday that caused the left and mainstream media to cry out the familiar accusation that our President is a racist and white supremacist. Today, the President doubled down on his statement and provided more clarity as to his message: If the Congresswomen who continuously hold the nation in contempt aren’t happy, they should leave.

One thing that the President did, intentionally or inadvertently, is to cause the ever-so-familiar cry of racism to lose teeth.

So interesting to see “Progressive” Democrat Congresswomen, who originally came from countries whose governments are a complete and total catastrophe, the worst, most corrupt and inept anywhere in the world (if they even have a functioning government at all), now loudly……

….and viciously telling the people of the United States, the greatest and most powerful Nation on earth, how our government is to be run. Why don’t they go back and help fix the totally broken and crime infested places from which they came. Then come back and show us how….

….it is done. These places need your help badly, you can’t leave fast enough. I’m sure that Nancy Pelosi would be very happy to quickly work out free travel arrangements!

It’s important to note that the President’s words yday, telling four American Congresswomen of color “go back to your own country,” is hallmark language of white supremacists.

Trump feels comfortable leading the GOP into outright racism, and that should concern all Americans.

The words “Why don’t they go back” in particular was called out as being particularly racist by virtually all Trump-hating leftists. This has only served to generate a great amount of attention as everyone held their breath to see what was coming next.

With all eyes back on the President, the intended message was driven home with an argument that is hard to deny: If you’re not happy here, leave.

The president appears to have been once again referenced Reps. Alexandria Ocasio-Cortez (D-NY), Ilhan Omar (D-MN), Rashida Tlaib (D-MI) and Ayanna Pressley (D-MA), who in a series of Sunday tweets, seemingly told to “go back and help fix the totally broken and crime infested places from which they came.”

President Trump responded to questions from reporters, this time dishing out more specific criticism directed at Omar and Ocasio-Cortez.

“Somebody that comes from Somalia, which is a failed government, a failed state, who left Somalia and ultimately came here and now is a congresswoman, is never happy,” said the president. “[She] says horrible things about Israel, hates Israel, hates Jews, hates Jews, it’s very simple.”

The president also seemingly referenced how Omar once joked about how one of her professors would say “Al-Qaeda” in a serious tone. He also recounted how the Minnesota Democrat downplayed the September 11th, 2001, terror attacks during a speech before CAIR earlier this year.