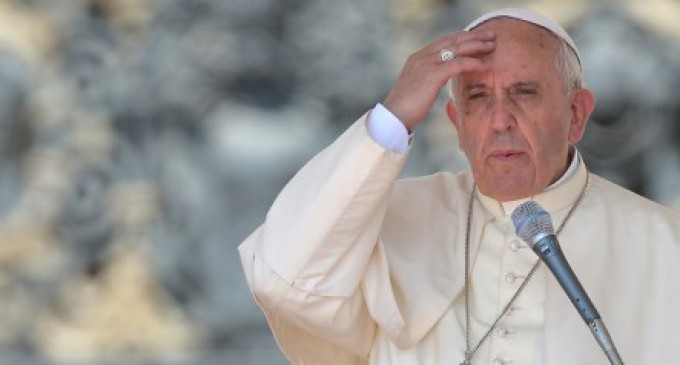 In an interview last week Pope Francis warned that the world economy is near collapse.

“Our global economic system can't take it anymore,” he stated.

While it's obvious that we are headed for a collapse of the entire world economic system, as every major nation is bankrupt and pulling off all kinds of shenanigans to keep it afloat, the Pope's comments are likely the signal that we are indeed on the last legs.

The Pope might not be an economist, but he certainly keeps friends that have their finger on the pulse of what's going on behind the scenes and can best estimate when the final breakdown will occur.

The question is, how close is close? Exactly how long will all the patchwork the banks and governments are doing continue to keep this dead horse alive?

One thing is for sure, historically, economic breakdowns are very often accompanied by war. Even the Pope alludes to the relation of war and money in his interview. War has been sought out as the ‘remedy' for economic troubles throughout our history.

And, you can bet on the fact that our government will not want to take the blame for the coming collapse – they will want a scapegoat.

One scapegoat could be war, as what might be heating up in the Ukraine.

“We are excluding an entire generation to sustain a system that is not good,” he toldLa Vanguardia’s Vatican reporter, Henrique Cymerman. (Read an English translation here.) “Our global economic system can’t take any more.”

The pontiff said he was especially concerned about youth unemployment, which hit 13.1 percent last year, according to a report by the International Labor Organization.

“The rate of unemployment is very worrisome to me, which in some countries is over 50 percent,” he said. “Someone told me that 75 million young Europeans under 25 years of age are unemployed. That is an atrocity.”

That 75 million is actually the total for the whole world, according to the ILO, but that is still too much youth unemployment.

Pope Francis denounced the influence of war and the military on the global economy in particular:

“We discard a whole generation to maintain an economic system that no longer endures, a system that to survive has to make war, as the big empires have always done,” he said.