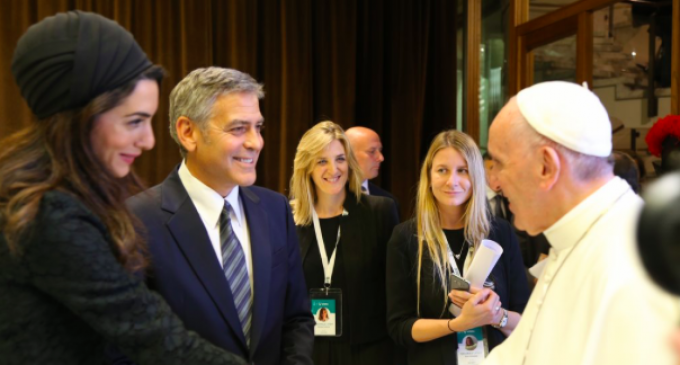 Pope Francis is a huge disappointment and a gigantic hypocrite. He was presented as a man truly concerned with the poor and the common man, but he has spent too many years focusing on Liberation Theology, which is also known as Christianized Marxism. He speaks of the poor but surrounds himself with the wealthy elite, as Marxists always do, and he demands that others take in the floods of migrant Muslims, but remains barricaded in the super opulent Vatican behind impenetrable walls (at least against Muslim refugees) while he lectures the West about opening their countries to the millions coming from the Middle East and Africa.

In recent months, even his belief in and commitment to Christianity and Catholicism has been questioned as he talks about the need for religions to meld together and the benefit of the Muslim onslaught to help the decrease in European population.

Most recently he invited wealthy, pampered actors George Clooney, Richard Gere, and Salma Hayek to receive the “Olive Medal” for peace at the Vatican. It was an odd selection and pointed up the strange focus on individuals who are very vocal about their concerns for the suffering Islamic refugees, but who have done virtually nothing personally to help the situation.

In particular, Clooney is a loud-mouth opinionated lefty who apparently cannot speak without reading from a script, as is evident in the video below, and who is facing withering criticism for his own hypocrisy.

Why the Pope would want to honor such dishonorable people is a mystery, and it should be of great concern to true Catholics who are seeing their religion hijacked by a cloaked Marxist who may not even believe in the mission of the church. But the video, which mostly addresses George Clooney, is a must see, and would be a terrific thing for the Pope himself to view and ponder.

Watch the devastating video on page 2, with 5 million views and counting: