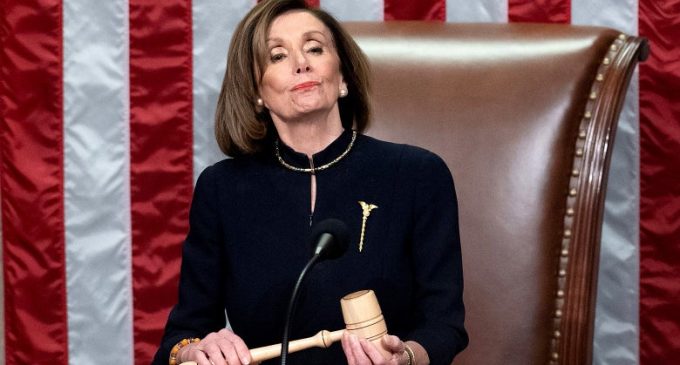 We were told the matter was urgent. That the president represented a danger to the country while he remained in office. That removing him was a solemn and necessary task. That he, among other alleged offenses, obstructed justice. That “politics” had nothing to do with it.

Now the leader of these same Democrats who have made these claims has put matters on hold. Turns out it’s not President Trump who is obstructing justice, it’s Mrs. Pelosi who is blatantly trashing the Constitution, obstructing justice, and turning the tragedy of impeachment into a complete farce.  It’s her neck that should be in the judicial noose.

Not political, or so Mrs. Pelosi claims? That’s a lie. The whole fraudulent mess is for political reasons. She knows when she turns matters over to the Senate that she loses any control as the impeachment will then be in the hands of the Republicans who can finally call the witnesses they wish.

So Nancy is trying to have it both ways. The Impeachment Show is not political when she is calling the shots, just when Republicans or President Trump have a voice. And this allegedly urgent matter on which the integrity of our republic supposedly depends has ground to a halt. This, courtesy of Mrs. Pelosi who, seeing almost certain defeat in the Senate, has decided to attempt to hold up the process — maybe for months.

It’s not a strategy that will work. More than that, it’s backfiring on the Democrats as Americans can see what really is going on. And we’ll look at that more closely on the next page including problems Speaker Pelosi may be creating for herself.