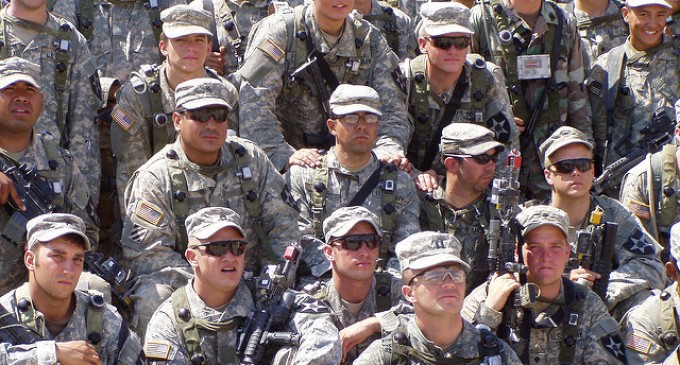 If a new poll is to be believed, Donald Trump has earned the support of one of the most coveted voting demographics.

After surveying 931 members of the armed forces, researchers found that out of all the candidates running for president in both parties, Trump was the preferred choice for the majority of them. A solid 27% of the survey's respondents said he was their favorite candidate, with his closest rival being socialist Democrat Bernie Sanders who came in at 22%.

More specifically, Trump enjoyed high levels of support from the Army and Marines, both of which saw 30% of respondents listing him as their choice. Although he wasn't the preferred choice of respondents in the Air Force or Navy, he still had significant levels of support, with the branches having 23.58% and 22.35% of their members favoring him respectively.

The numbers are a major boon to Trump, who has been hounded by critics for his relative lack of foreign experience. Earning such impressive levels of support from servicemen will undoubtedly help him mute such attacks.

Although Trump may lack traditional foreign policy credentials, the men and women of the military seem to think that he has a strong grasp on the subject and can be counted on to look out for the country's best interests. Gaining the support of such an esteemed group alone is a worthy accomplishment for anyone seeking the presidency:

“The data seems to indicate that the GOP national security establishment’s attempt to discredit Trump’s foreign policy credibility has failed — at least as far as servicemembers are concerned.

Trump’s hardline stances on national security issues appear to have attracted dedicated support from members of the military, though several military officials have complained about his aggressive statements on torture and the killing of terrorists’ families, which Trump had to walk back.

And even though Sanders has also been perceived as weak on foreign policy, that fact hasn’t hurt his polling numbers among servicemembers.

Despite Sen. Marco Rubio’s attempts to prioritize foreign policy in his platform and despite the Republican national security establishment essentially throwing all of its might behind his campaign, he ranks second to last in the survey.”