The fact that someone can be arrested at a school meeting for expressing their upset at the school handing out pornographic material, without even telling the parents they were doing so, is incredible. 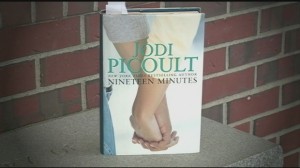 GILFORD, N.H. —Parents said they are trying to understand why Gilford High School is requiring some students to read a book that includes a graphic sexual encounter.

School district officials said the book, “Nineteen Minutes” by Jodi Picoult, has important themes in its story about a school shooting, but parents said the message is overshadowed by one disturbing page.

The book contains a description of rough sex between two teenagers. Although the book has been read by Gilford students in the past, this year parents were not made aware of it until their kids already had a copy of the book.

“I am utterly appalled that this was an oversight, that my son had this book in his hand for a week. (It’s) unacceptable,” said Sarah Carrigan, a parent.

William Baer was handcuffed and escorted out of a meeting Monday night about the book.

“I fully understand how he feels. It really is a huge violation,” said Barbara Baer, his wife.

Shortly before their daughter was supposed to read the book, the Baers found page 313, which details a graphic sexual encounter.

“Why should those ideas be put in their mind. They can discuss this some other way. They don’t need that kind of imagery,” Barbara Baer said.

School district officials said students have read the book before, but the school sent notifications home to parent before the books were distributed. Officials said there was an oversight this time.

“Did that page, 3-whatever is referenced to make my daughters feel uncomfortable. I hope so. I hope so. It brought up conversation,” said Joe Redding, a parent. “That page of the book is not relevant to the topic of the whole entire book.”

Others said the page overshadows the rest of the story.

“You are also cheating the kids out of being exposed to real literature in front of them. This is garbage,” said Doug Lambert, a parent.

School officials didn’t answer any questions Monday or vote on anything concerning the book.

Picoult said the school district has been supportive.