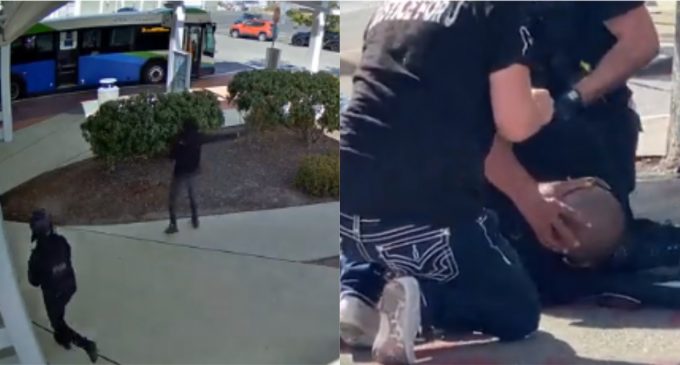 Tusitala “Tiny” Toese, a leader of the Proud Boys in Portland, was shot in the foot during an anti-COVID protest in Olympia, Washington on Sept. 4th. Toese was reportedly attempting to chase down Antifa members when he was shot, though it is currently unclear who shot him and no arrests have yet been made.

The rally was organized to protest against face masks and COVID-19 mandated vaccines.

A man in the background of the video can be heard shouting, “Tiny got shot in the leg.”

Tiny of the #ProudBoys has been shot here in Olympia, Washington. The shooting took place .8 miles away from the state Capitol, after Proud Boys pursued #Antifa Black Bloc- who showed up within a square block of a Medical Freedom protest. pic.twitter.com/QMZxFasWRJ

Olympia police arrested a man in connection with the shooting of a Proud Boy member at a transit station during clashes on Sept. 4.

The man, a 36-year-old Olympia resident, was booked into Thurston County jail Thursday on suspicion of first-degree assault while armed with a deadly weapon, according to a city news release.