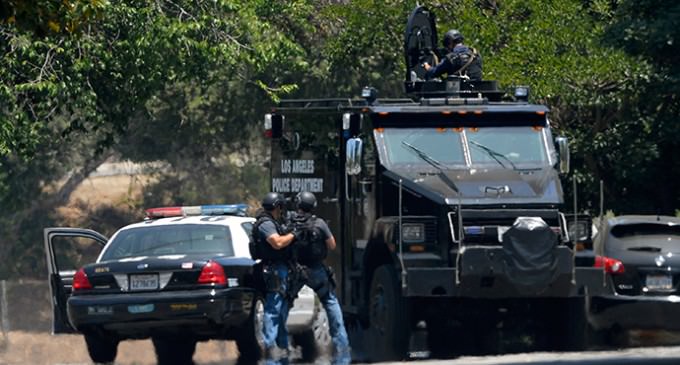 The Dept. Of Defense’s Excess Property Program ‒ or 1033 Program ‒ has given police departments across the country surplus war machines and arms over many years.

This equipment came out on full display during the Ferguson, Missouri riots and caused many to question the excessive force and seemingly unnecessary use of weaponry.

Several police departments have been trying to give these war machines back to the Pentagon, but to their dismay the Pentagon won't take them back.

So why is the DOD refusing to take the equipment back?

According Rob Davis, the mayor pro tem of Davis, CA one city that is trying to give the equipment back, it's because the Pentagon is using the police dept's as storage.

“It's a low-cost storage method for them,” stated Davis. “They're dumping these vehicles on us and saying, ‘Hey, these are still ours, but you have to maintain them for us’.”

If this isn't obvious…we have a failing, out of control communist government who's using local police departments as their storage facilities for war machines until the day comes when they finally collapse everything and these machines will be used to quell the populace.

Our economy is on its final legs. We are printing money like crazy just to pay the bills, which is indicative of the final stages before hyperinflation. They know it's coming, we know it's coming, but they are far more prepared.

But the program does more than fill police departments' arsenals, according to Kathryn Blake, secretary for the Iowa fire marshal's office.

“Everybody only sees the weapons,” Blake told KCRG. “What they're not seeing is, in the state of Iowa, we have a couple of boats for water emergencies. We have ATVs, office equipment. They've received computers, filing cabinets, you name it.”

Police forces wishing to return their equipment must go through their state offices, like Blake’s in Iowa, and cannot directly contact the Pentagon. However, the state offices can’t help because the Defense Department had closed the portion of its website that allows police departments to request returns until October 1. Blake says she is overwhelmed by the responsibility, which is only part of her job description.

“For an additional duty, this has caused me a lot of gray hair,” she said. “Last year this time, I'm just trying to keep my program moving. All of the sudden, I'm defending this program.”

Ursula Kroener – a police spokeswoman for the San Diego school district police department who is trying to return an 18-ton MRAP – was told that the Pentagon halted returns partly because so many law enforcement agencies are clamoring to return their equipment, Mother Jones reported.