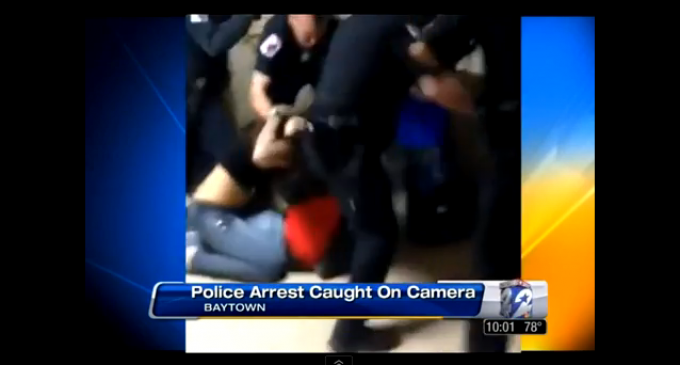 Citizens are protesting police brutality in Baytown, TX after they allegedly pepper sprayed children and tasered 7 adults, including a grandmother 4 times, after responding to a complaint of loud music at a birthday party on May 4th.

Police responded to the accusations stating that the partygoers had attacked them first after they attempted to arrest one of them, and that they had actually locked 2 officers inside in order to trap them. However, the video shows 5-6 officers inside, not 2, as the dept. officially stated.

Baytown police are denying allegations of excessive force and racism leveled by guests at a house party where seven people were arrested after officers answered a loud music complaint there around midnight May 4. Much of the incident was recorded on cell phone video released Sunday.

Police say two officers warned homeowner Jose Zepeda earlier that evening that neighbors had complained about loud music. When they returned around midnight, Det. Edgar Elizondo says the officers found Zepeda in his backyard with 15-20 partygoers, and wrote him a ticket for disturbing the peace.

Elizondo says Zepeda refused to sign the citation, and the officers attempted to arrest him. Elizondo says three men stepped in to stop them: Rodolfo Zepeda, 19, Edgar Garcia, 24, and 23-year-old Christian Zepeda.

When the officers used pepper spray on the men, two of them ran into the house, Elizondo says, and the officers followed them. Once inside, police say someone locked the door behind the officers.

“You basically had a couple of officers inside trapped, fighting with people,” said Elizondo.

The officers put out a distress call. As help arrived, Elizondo says police used Tasers on three people who tried to interfere with arrests. One of them was 53-year-old Maria Zepeda who is seen on the video writhing after being shot with a Taser.

Her son, Gustavo Zepeda, says his mother was doing nothing but sitting in a chair when a female officer kicked her out of the chair when she didn't respond to a police officers' commands.

Family members claim Zepeda was shot four times with Tasers. Elizondo says she was shocked once when she tried to stop police from arresting her son.

Another part of the video shows several young children crying and complaining that they have pepper spray in their eyes.  Elizondo says the officers did not spray anyone inside the house. He suggested the children may have been affected by spray still clinging to the men's clothes after they ran inside.

There were also allegations that the video shows police referring to party-goers using racist names during the struggle. Elizondo says the video actually shows something else.

“We slowed that video down and you could plainly hear the officers saying, ‘Get back, get back.' There were no racial remarks made, most of the officers there were Hispanic,” Elizondo said.

Dozens of angry protesters marched on the Baytown Police Department Sunday calling its officers criminal and abusive toward Hispanic people.

“The Baytown Police Department has a notorious record of violating the civil rights of Mexicans and blacks,” he said.

He added, “What are the citizens to do when they are being beaten and pepper-sprayed and Tasered, and they have done nothing criminal at all.”

Elizondo says the video has been turned over to prosecutors with the Harris County District Attorney.