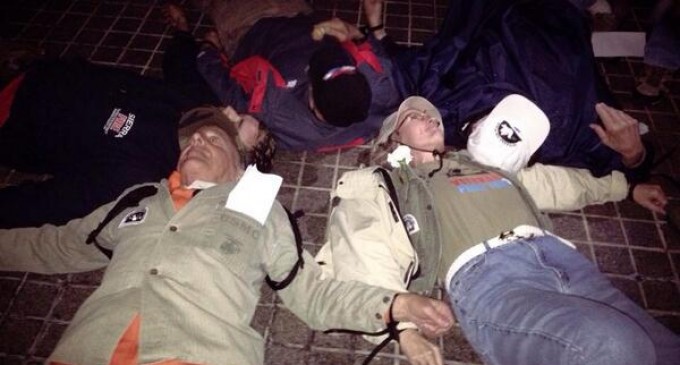 War Vets handcuffed themselves together at the NYC Vietnam Memorial Plaza on 12th anniversary of the war in Afghanistan.

Police arrested numerous Vietnam veterans during a vigil at a war memorial in New York City last night after the protesters refused to adhere to a 10pm curfew.

The veterans had gathered at the Vietnam Memorial Plaza to protest the 12th anniversary of the war in Afghanistan by reading out the names of deceased US soldiers. One video shows a man speaking about how veterans are committing suicide.

“This is a sign of betrayal….it’s important you know that your government committed immense atrocities during the Vietnam war, we did it every day,” he states. After the Park Service rejected the group’s application to hold a protest at the site, an all night vigil was planned.

The group argued that its first amendment rights superseded the 10pm curfew. Photographs show veterans being handcuffed and loaded into paddy wagons. A live stream video recording of the event shows demonstrators chanting, “whose side are you on?” before police, after several verbal warnings, move in to make the arrests.