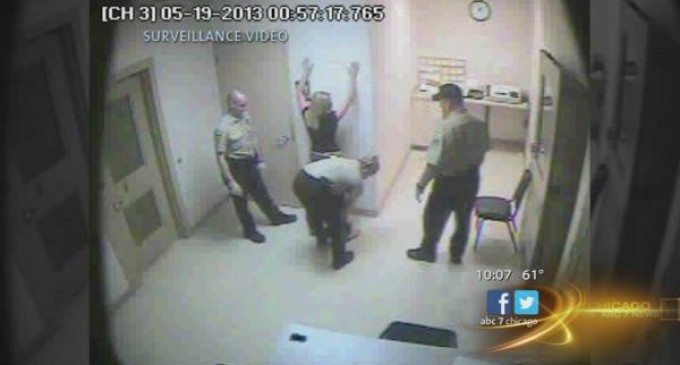 Do you really think this would have happened if she was unattractive?

This could happen to you…

Dana Holmes was arrested in May on a DUI charge to which she pleaded guilty. However, she never could have known what would be in store for her when she arrived at the LaSalle County Illinois jail.

Holmes is alleging that she was illegally strip searched, when officers reacted to her moving her leg during a pat down. The video shows her move her leg slightly, whereupon officers quickly react and restrain her.

Then they throw her to the floor. After securing her they carry her into a padded cell, strip off her clothes and leave her lying there naked and alone.

State law in Illinois requires that strip searches only be performed when police have a “reasonable belief” that an individual is concealing a weapon or controlled substance on their body and they must be done by officers of the same sex only where they can’t be watched. Resisting arrest is not grounds for a strip search in Illinois. The video clearly shows three male officers and one female. Holmes is suing for unspecified damages.