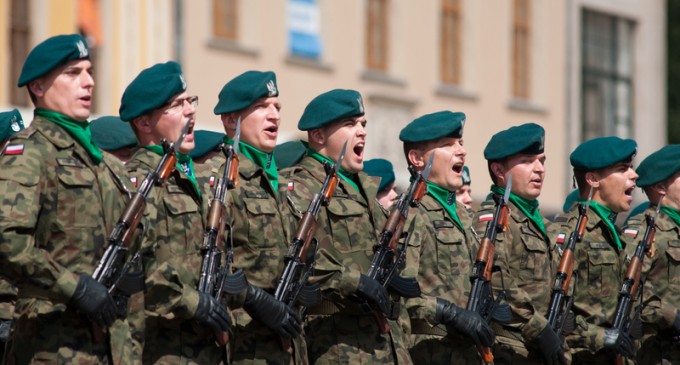 Russia's president Vladimir Putin is determined to reconstruct what he considers the be the glory of the former Soviet Union, and so he has tipped his hand in several ways. He has taken parts of the Crimea, and his claim that parts of Ukrain are rightly Russian territory of Russia due to large Russian populations within certain Ukrainian areas were excuses to annex parts of the country. He is also venturing into the Middle East, though truly his desire is for European territory and pathways to the Baltic and Black Seas and easy transport of Russian natural gas to world markets.

Poland is a major prize, but the Polish still remember the suffering and servitude under the former Soviet Union, and they are determined to not let that happen again. To that end they are relying on NATO and also preparing internally to reject Russian efforts to carve out pieces of their country, and to put in to place internal military and paramilitary groups that can fend off Russian aggression and “infiltration,” at least until NATO support can arrive to help.

Paramilitary groups are to be formed in Poland to enhance its military capabilities as part of the preparations for a possible ‘hybrid war’ with Russia, the Defense Ministry said.

“The territorial defense force is our response to the threat associated with hybrid warfare,” said Polish Defense Ministry official Grzegorz Kwasniak, who is responsible for the creation of the new paramilitary group.

The new force will comprise 35,000 civilian volunteers that will undergo military training. Each Polish province will then receive one brigade of the territorial defense force, consisting of volunteer battalions, with the biggest and most populous Mazovia province getting two brigades.

The eastern Polish provinces of Podlachia, Lublin and Podkarpachie will have priority in deployment of the paramilitary units as they are deemed to be most exposed to the perceived Russian aggression.

“Enrollment of the first members of the territorial defense force will start in September,” Polish Defense Minister Antoni Macierewicz said on Thursday at a conference of paramilitary organizations in the northern Polish town of Ostroda, AFP reports. He also said the group’s command structure and senior appointments had already been decided in April, as reported by the Polish PAP news agency.

The personnel of the newly formed paramilitary units will receive a monthly payment amounting to 500 zlotys (€125), according to dpa.