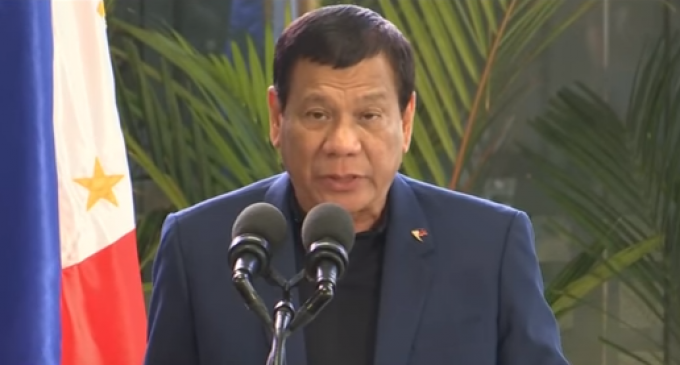 For months, Philippines President Rodrigo Duterte talked tough when it came to Islamic terror and has arguably taken the most hard-line stance against it of any single world leader.  Only weeks ago, in a rant against Islamic jihadists, Duterte stated that if the terrorists wanted to take their chances in the Philippines, he would have them arrested and he would do to them what they do to others…only worse.  He was quoted as stating that he would have their liver brought to him with some salt and vinegar and would consume it.

Now, ISIS has completely infected one entire island of the Philippino nation.  Mindanao is the home of a very large population of Muslims and the island's social structure has been split between two large Islamic sects:  the Maute and Abu Sayyef, both ISIS affiliated.  In 2012, ISIS established the “Khalifa Islamiah Mindanao” (“Mindanao Islamic Caliphate”) recently receiving a pledge of allegiance by the groups who have since raised the ISIS flag over their headquarters in Marawi.

While tough and unorthodox, Duterte is not well-regarded by many of his people.  Here in Ketchikan, where the population of Philippino people is tremendous because of an historically-based workforce going back all the way to the 1800s, I have been privy to many conversations with people from the islands of the Philippines nation who are extremely upset with the leader.  The Philippinos here take trips back to their homeland, sometimes for two and three months at a time.  They bring back goods from America that are extremely difficult to obtain there.  But there is no shortage of opinion, political or otherwise, when it comes to President Duterte.  And while most didn't bat an eye last year when the Philippino leader told Obama what to do with his advice for their nation (not in such diplomatic terms as those) by and large they do not agree with Donald Trump on any issue.

Most of the Philippino people are friendly, hard-working and genuinely sweet people who will share their food with you without so much as a spoken word and I have become friends with many of them who are co-workers.  That being said, they are very distrustful of President Trump's policies.  When asked why, they simply point to Rodrigo Duterte and remark that Trump reminds them of him.

I've never been to the Philippines, nor even to the South China Sea, but I have been told about the abject poverty in that nation, the restrictions of rights, the corruption of government, and the election fraud…but in the big scheme of things, it doesn't sound all that different than the United States after all.  We have our problems with all of those things, particularly over the past presidency, as is evident from the rise in food stamp recipients and assistance, the attempts at restricting both the First and the Second Amendments, the nearly constant cycle of leaks from the Obama shadow weasels, and the information being revealed  by the new Voter Fraud Commission.

With almost all of Europe so binded by political correctness to do anything meaningful about the ISIS invasion, they might not be too far away from doing what the Philippines has done.